May 2012:
Added an interview with Clive Nolan by Michel Scheijen.

His parents were music teachers, so he started playing piano at the age of three, then violin at the age of eight, the went on to get a music degree at University.


Vocals/keyboards/producer. Mostly he works with Karl Groom in; 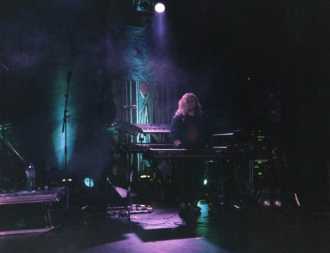 Tracy Hitchings ('92),
Threshold and
Peter Gee (from Pendragon, '97),
Landmarq,
The Greatest show on Earth. ('98),
Jabberwockey is another project with Oliver Wakeman and many others ('03-'04).
Arjan Lucassen (Ayreon; Into the electric Castle; '98, Flight of the Migrator '00),
Hybrid ('99).
Marked For Madness - Michelle Young (productions and keys).
Dragonforce: Valley of the Damned (2003 with Clive Nolan, Tommy Hanson and Rob Aubrey) &
Sonic Firestorm ('04) also from Dragonforce with Clive and Richard West (from Threshold),
Arena (Pepper Ghost '05 / together with friend Karl Groom).

Caamora is the name of the latest Clive Nolan project. It is a collaboration between Clive and Agneiszka Swita, a lady from Poland of whom all information seems classified up till now (the official Caamora homepage lists a big '?' as her biography). The two are working on a project called She ('06-'07).
Christina Booth from Magenta is involved too.

In 2011 he did some live shows with Camoora. 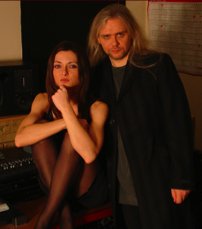 Blind Ego ('07) a project from the great guitarist of RPWL Kalle Wallner.

With ex-Marillion-drummer Mick Pointer in Arena (from '95).

Casino is a project from '97 with members of Pallas, Arena, Threshold, Iris & 12 Night.

Clive Nolan has released an album containing various "rarities" from his recording career, including Shadowland demos, film soundtrack work and tracks recorded for samplers. The album is titled Skeletons in the Cupboard (May 2003).

Clive Nolan and Nick Barrett are teaming up for a two man show in Chile and Argentina and there are plans for a show with Ray Wilson.
Meanwhile Clive has written the lyrics for Crimson II, from the Swedish Metal band Edge of Sanity, led by Dan Swano.

Alchemy, a New Musical Project by Clive Nolan.
'Alchemy' is a multidimensional musical project to be developed in numerous stages and forms. The libretto and the original story are both by Clive Nolan. It is a Victorian adventure set in 1842, with a sense of the dark and mysterious.
The 'Alchemy' album will be recorded at the end of this year with the concert version being filmed for DVD in February 2013. The CD and DVD (and collectors Box Set) will be available by the middle of 2013.

A number of principal characters in Alchemy as well as other cast members have now been confirmed. The musical will see the return of many actors known from the Caamora Theatre Companys previous productions of 'She - the Musical': 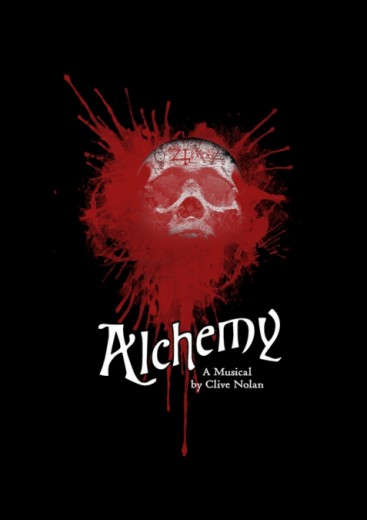 The album version of 'Alchemy' will feature
More names will be confirmed soon.

Please check out his tour dates.

On September 2nd, 2012 the 'Podiumcafé Boerderij / (small stage at the bar):
Clive Nolan will try to raise money for the theatrical production of Clive's new musical, with:

This performance will be videoed with the hope of including it in the special edition DVD package of 'Alchemy' to be released by Metal Mind Productions in 2013.

The band will be making its debut American appearance at the Rites of Spring Festival in Phoenixville PA on April 28th 2006. As well as music by IQ, Arena and Clive Nolans solo career, the band will be joined by special guest Nick Barrett to perform material by Pendragon, Alan Reed of Pallas and Peter Banks to perform songs by Yes. A further guest artist is l ikely to be announced shortly.... read more below.


NEW DVD.
"Broadcast" concert filmed at the beautiful Wyspianski Theatre in Katowice showcases some of the greatest tracks from IQ, Pendragon, Pallas, Arena, Nolan/Wakeman and more, played and performed as you have never seen them before. This DVD is a must have for fans of these great bands, or as an introduction to them all. Superb musicianship and an awful lot of fun! As Clive Nolan comments, NEO's main aim was to "try and brake some new frontiers () and to represent these bands and so to get the people who haven't seen them to get an idea what they're about." The gig featured a guest appearance of two other eminent prog-rock figures: Pendragon's vocalist/guitarist Nick Barrett and Pallas' vocalist Alan Reed.

The DVD includes an interview with John Jowitt and Clive Nolan, as also bonus video footage from the band's soundcheck at ROSfest. Also available in a limited swing case edition, with a bonus CD with songs recorded at the concert!


Neo:
Due to reasons beyond our control, we are very sorry to announce that the NEO christmas shows at: Essen on the 21st & Zootermeer on the 22nd of December have been cancelled. They will however be re-scheduled sometime next year.
NEO.

An review and great samples you can find on their MySpaceSite: