Steve Leigh- keyboards, followed up by

The most spectacular is their album Solitary Witness ('92); produced by Clive Nolan & Karl Groom. Infinity Parade is their second album. Damian Wilson leaves the group but retuns quickly. The vision Pit

('95) is made with the same line-up and Tracy Hitchings for a few vocals. In '98, Science of Coincidence, there find place a change in lead-vocals, Damian disappears and Tracy Hitchings takes over all vocals, and Groom & Nolan are to busy working on other projects. Thunderstruck ('99) is more then a impressive live recording, Tracy and her lads are really giving a show.

The Solitary Witness ('02) re-issue contains a bonus track in the form of the earliest of all Landmarq's official releases: the abridged version of Suite: St. Helens. This was recorded prior to Damian Wilson joining the band and vocals are performed by Rob Lewis-Jones. This track was only ever released on the 10th anniversary compilation CD from SI Music in 1991.

Steve Leigh has bowed out of Landmarq, citing a combination of increasing personal and family commitments, as well as musical differences as his reasons for leaving. A replacement for Leigh has not yet been announced. (November 2002).
Gonzalo Carrera is the new man. He played in with: the Yes tribute band Fragile. Carrera is probably best known in these circles for his work with the excellent Spanish prog band Galadriel, whose Chasing the Dragonfly album is a modern classic. He has also worked with ex-Tull members Clive Bunker and Glenn Cornick, and with ex-Quasar bassist Keith Turner and ex-Enid member Nick May

NEWS May 2005:
We regret to announce the news that keyboard player Gonzalo Carrera and Landmarq have parted company.

Due to increasing commitments aside from Landmarq, it was becoming more and more difficult for Gonzalo to devote the necessary time to the band that is required.

This was an extremely difficult band decision that was not taken lightly. Gonzalo is a fine keyboard player and musician who has brought his own unique and individual approach and personality to the band over the last two years. We consider Gonzalo a friend and he will always be a part of the Landmarq family. All of us in Landmarq wish Gonzalo every success with all that he chooses to do in music.


Keyboardist Mike Varty (Shadowland, Janison Edge) has now joined Landmarq. He is now busy learning truck-loads of keyboard parts both old and new and will also be contributing to the bands next album which is already under way. Mike replaces Gonzalo Carrera who we reported last week had joined Karnataka.

DVD TURBULENCE.
Back in the mists of time -- actually a couple of weeks ago -- Landmarq flew to Katowice, Poland, for the purpose of playing a concert which was filmed for DVD release. This will be Landmarq's first official DVD and will be entitled Turbulence. Aside from the concert itself, which was filmed in front of a capacity audience at the S. Wyspianski Silesian Theater in Katowice, it will contain a wealth of bonus material including some rare archive recordings and video of Landmarq past and present. There will also be a large photo gallery, band interview, biographies and various other items of interest. The DVD is now in post-production and will be released through Metal Mind Productions. No actual release date has been set though it is expected early in the new year. Additionally, the new studio album from Landmarq is also still in production with the band busy working on new material for this release. And another DVD release from Metal Mind. Landmarq's Turbulence - Live In Poland is out now!
The features the full gig in 5.1 surround sound as well as loads of extras and is out now (April 2006)! 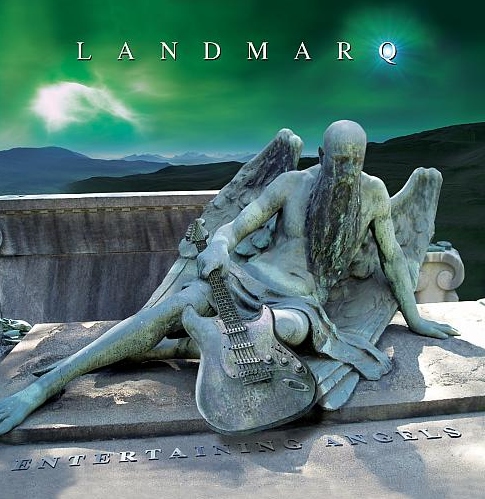 2. NEW ALBUM UPDATE
Entertaining Angels was planned years ago, but by personal problems it was released in May 2012.
We 're glad the band is back in high life:

A run-down
of titles recorded so far with a few explanatory notes:

1. ENTERTAINING ANGELS - (very popular live opener finally committed to disc)
2. STRANGE BUT BEAUTIFUL - (first of the 'epic' tracks coupled with the following track
3)
3. SPIDERMAN (SPY THE MAN) - (part 2 of the above)
4. PRAYER (COMING HOME) - (a very melodic torch song-type ballad)
5. THUNDERSTRUCK - (a very tricky guitar-keyboard theme opens this 12-minute-plus tour de
force!)
6. WALKING ON EGGSHELLS - (another of the more 'song-based' tracks)
7. TIMELINE - (melody, melody!)
8. MOUNTAINS OF ANGLIA - (Anglia is the lower eastern region of the UK - and flat as a
pancake!)
(© All songs are copyright Landmarq 2005)

Of course, things can change and the above is not necessarily the actual running order.
No release date has been set and the band are also discussing possible titles for the new album.
We are also continuing the Landmarq tradition of placing the title track of the previous
album (in this case, 'Thunderstruck') on the current album....

Hugh McDowell (cellist with Electric Light Orchestra and others) will be a guest on the new album!

He made several albums;

He'll hit the road with his Maiden United in 2012 again.

In November 2011 he went out to play in the Netherlands, Belgium and Germany. He played twice with Sun Domingo, one was in the lovely South of the Netherlands. It was one of the most funniest gigs of 2011 for me.
A wonderful show, filled with jokes, serious talks and great Music. 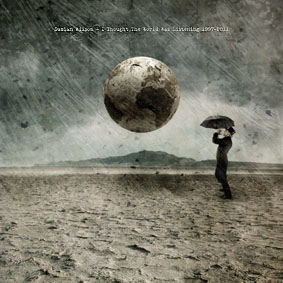 New album:
I Thought The World Was Listening 1997 - 2011
Release: October 2011.
And it beame a beauty, singer-songwriter stylish.
Very laidback with new arrangements of old songs and 5 new songs.

GONZOLA CARRERA
Worked with Clive Bunker and Glen Cornick (both Jetro Tull members) in Oak.
Recording with Ian Jones, formerly of Karnataka, on the album Chasing The Monsoon ('05).
Playing keyboards for Nick May (ex-The Enid, ex-Jadis) on his first solo album Whimwise ('05).
TRACY HITCHINGS
See her own page.

MIKE VARTY
Plays in Credo with a new album 'Rhetoric' ('05).


A few members of Landmarq, Tracy, Steve and Dave, joined forces in ProgAID ('05). Tracy works with Clive Nolans (2012) on his musical (Alchemy).