American symphonic band, with some heavy lines and sensitive ballads, metal influences and one singer from Canada.

Pink Storm Thorgenson does the art-work of Fallen into Infinity ('97) produced Kevin Shirley. In June '98 the guys give a show in Paris; Once in a Livetime. In '99 with a good selling Metroploizz. Derek is replaced by Jordan Rudess; Scenes of a Memory ('99).
End 2001 with a Six Degrees of Inner Turbulance and they start a tour.

Train of thought is the latest metal symfo ceedee of this band with the nick-name Dreammetallica:


They played again a Pink FLoyd song (One of these days) on theire latest gigs in Rotterdam (January 2004).

And this their album called Octavarium from 2005. 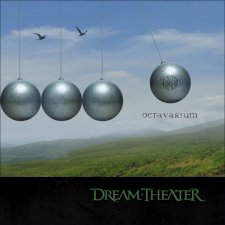 Systematic Chaos ('07) is the regualr edition, there is a double edition of this album too.


Drummer Mike Portnoy and guitarist John Petrucci are once again at the helm as producers, while Paul Northfield mixed the record.

Raw Dog is the name from the instrumental sonmg that will be used for the playstation3 game "God of War III".

Portnoy and Petruccie have some free time to support Liquid Tension a project of Tony Levin.

Mike Portnoy, Daniel Gildenlöw (Pain Of Salvation), Kevin Moore (Chroma Key, and ex-Dream Theater), Jim Matheos (Fates Warning) and Sean Malone (Gordian Knot) have formed a new project. The group is entering a studio in the US virtually as we speak to record an album which is scheduled to be released on Inside Out Music at the end of October or beginning of November 2002.
OSI is a new project with; Jim Matheus (Fates Warning), Kevin Moore (Chroma Key), Steve Wilson (Porcupine Tree), Sean Malone (Gordian Knot). Nice booklet and again some nice heavy prog-rock.


Amazing Journey - One Night In New York City 2CD, 2007
Mike Portnoy's all-star tribute to The Who featuring Paul Gilbert, Billy Sheehan and Gary Cherone The entire concert recorded at BB King's in New York City on May 31st, 2006. And they played songs from the Who (yep the whole Tommy ;-).
Live drums for the all star meatl band "Hail!".

Sheridan does some work with or in:

NEWS May 2011:
I just finished my final keyboard overdubs today for solo record #7 (I still need an album title, and 7 song titles!!) Simon Phillips is mixing over the next 10 days.

I am very excited about this record. It is very much in the vein of the early Jeff Beck instrumental records. I am using a lot of Vintage B3, Rhodes. Moog and piano throughout the record.

Special thanks to Steve Lukather, Steve Stevens, Joe Bonamassa, Tony MacAlpine, Doug Aldrich, Jimmy Johnson, and especially Simon Phillips for your involvement. This record will be released in August on Mascot Records.

I am going to take sometime off before the Black Country Communion tour kicks off in June. Look for the realease of BCC 2? in June.

I hope to see you this summer.
Cheers,
Derek Sherinian

Roswell Six ('09.
International bestselling author Kevin J. Anderson has created an incredible fantasy universe with sailing ships, sea monsters, and the crusades. The first novel, TERRA INCOGNITA: THE EDGE OF THE WORLD, will be in stores in June from Orbit Books.