Look for a new live Spock’s Beard DVD and extensive European tour in early 2012, followed by our 11th studio release sometime in the summer. We’re energized and excited, and will be posting updates and sound samples as we progress.

The new sensation of heavy-symfo-land in the year '97:

Beware of Darkness ('97) is one of the best albums in that year in heavy-symfo-land.
Kindness of Strangers ('98) is the next album with roots of Yes, EL&P cq Genesis. The Beard is out There is a live recording from '95 ('98). From the Vault. is a live complication only released in the U.S..
The album Day for Night (spring '99) is an album wich i like most (not to heavy and a few bits of the Beatles). With another live-album Live at the Whiskey's and V (2000) new progressive steps are made.

The Offical Live Bootleg: The Official Live Bootleg album, which has been out of print for some time, is back on the shelves again (May 2002). The material on this album was taken from the Beard's performance at Progfest 1995, so this is some very early live Beard indeed.


The new studio-album is called Snow ('02) and is double ceedee, with the most beautifull ballads they've ever written and some other heavy parts i never heard before. Snow is an albums of extremes. If you can buy the limited edition box, 3 ceedees. The line-up didn't changed, they had some help from:

In the meantime it has be announced that Nick will leave the drumkit and will do the vocals... A new Phil Collins is born. At the end of 2002, shortly after the departure of Neal Morse, Spock's Beard finally released their long-awaited DVD, Don't Try This At Home + The Making Of V, more than three years after its recording in Tilburg during the "Day For Night" tour. The DVD can be seen as a farewell present of Neal Morse, with an astounding package of not one, but two extras packed DVDs *and* a bonus CD, with a total playing time of over five and a half hours.
The first disc is a registration of the entire gig at the 013 in Tilburg on September 28th, 1999, which was earlier released as two live CDs: Don't Try This At Home and Don't Try This @ Home Either. This is the same venue as where IQ filmed their Subterranea concert. The new Spock´s Beard album is entitled Feel Euphoria. Street date is the 30th June and it will be the first statement of the band, since Neal Morse left. New vocalist is drummer Nick D´Virgilio. "Feel Euphoria" will be also available as Special Edition. Spock´s Beard are coming to Europe in Autumn.

Feel Euphoria is a cup of seventies prog and a saucer of good rock music. Nick singing is oké, Ryo's keyboardsolo's makes the album interesting. They'll survive!
The story looks like as the story of Genesis, but i like Trick of a Trail more then Feel Euphoria, the most people who know me will see that as a compliment ;-)

Tsunami Relief CD
Started out as a simple "what if..." idea in an online community. And it will become big too:

feel free to take this banner and place it on your own site as a link to this project!!
Gluttons For Punishment - Live 05 (2005). A double live album.

The band's ninth studio CD is simple called Spock's Beard.
An album with fantastic prog songs, like the instrumental track "Skeletons At The Feast", but also an album with some rock songs like "Wherever You Stand". Oh and I don't mind rock songs but I don't know if it was wise to put them on the disc. Maybe a shorter disc witht the more excellent proggy songs would grab my attention from the first till the last tune. But nevertheless a fine album from some excellent musicians.

SB will be playing at the Night Of The Prog in St. Goarshausen, Germany on Saturday, July 7, 2012. More info: tour dates.

Together with Mike Portnoy (Dream Theater), Pete Trewaras (Marillion) and Roine Stolt (Flower Kings) under the flag of Transatlantic. One studio-album and a double-live recording.
It's not to late (August 2001) is his second solo-album.

This he wrote on the website of Spock Beard, after his depature:

I want you all to know that I've given it careful consideration, thought and prayer, and it's with great sadness that I make this announcement.

The band is going on and I fully love and support them and I hope you will too.

Thanks to you all for making our dreams come true. My family and I wish you all the best.

Testimony is his double album from 2003, with MIKE PORTNOY from Dream Theater and KERRY LIVGREN of Kansas! A verry fine proggy album, a bit less heavier as we are used from Spock's Beard.

One ('04) is his new studio album with Mike Portnoy on drums, bassist Randy George and guitarist Phil Keaggy.
Neal also took a more collaborative approach on One, writing with Portnoy and George. 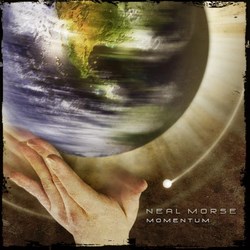 Momentum wil be the new album released in summer 2012, with:

Please check out their tour dates.

The Power of Two, A Flower Kings Side Project.
NDV will be playing drums and singing for Cirque Du Soleil (2010).

Mystery, with Benoit David, yes he sings in Yes nowadays ('12).

Solo with the album Karma under the name NDV. On the album, Nick handles guitar, keyboards, bass and drum duties as well as providing an astonishing array of confident vocal directives. Along the way Nick is helped out by various colleagues including:

Karma takes the listener through a journey reminiscent at times of The Beatles, Dave Matthews, Elton John, Led Zeppelin and much more. Nick: "The idea of Karma works its way into many of the songs, and that word describes where I'm at with my life anyway, with my family growing, new house, the band. The hook line in "Karma" is 'You can't hide when your karma follows you.' Good or bad karma can follow you anywhere."

Spock's Beard drummer and now also their singer Nick D'Virgilio has become full member of the post-punk formation The Rubinoos. Recently, Nick was with the band in Spain and Japan to perform a lot of gigs. You can also hear Nick on their newest album "Crimes against music" on which the band bring you 13 covers in their own “bubblebum” way. Songs from amongst others, Eurythmics, Elvis Costello, American Breed, Sweet, Del Shannon, Beach Boys and Todd Rundgren's Utopia are given a specific Rubinoos arrangement. Certainly a very busy boy, our Nick!!!

Nick did first session for Big Big Train but he became full member of this exceptional good Genesis stylish band.

Spock's Beard keyboard player (and general madman) Ryo Okumoto is in the early stages of pre-production on his new solo album. It is reported that the album will feature many guest appearances by musician friends of Okumoto, including Simon Philips, Steve Lukather and Bobby Kimball from Toto. Spock's Beard bandmates Dave Meros and Nick D'Virgilio will be part of the core band. The album is called "Coming Through".

John Payne, Guthrie Govan, and Jay Schellen from Asia as well as our Spock's Beard keyboard player Ryo Okumoto - are behind GPS. A band teamed up in 2006.

Ryo i involved with K2 aswell. They follow up their well received debut Book Of The Dead with Black Garden.