Born in Middlesbrough on 15th January 1959, Pete's earliest musical passion was the BEATLES. He still remembers his mum bought "Twist and Shout"-Pete was 5 years old.
His first School's band was called "Manantus" (On Guitar with Robin Boult (later in Fish) 1972). The collaboration with Robin streched out till 1982 in different unnoticed bands.

let us hear some jazz-rock with symfo and floydian guitar-work of Sylvian.

Together with Mike Portnoy (Dream Theater), Neil Morse (Spock's Beard) and Roine Stolt (Flower Kings) under the flag of Transatlantic. An studio-album ('00) and a double-live recording ('01). One of the best prog./ symfo bands of the new century?
They re-united in 2009 with the Whirlwind.

He played also on the album "Postmankind" with Ian Mosley (yep drums in Marillion) and Ben Castle ('01).

Together with Steve Rothery & Pete Trewavas (named as The Marillion string department), had joined in a band called Stranger by the Minute, together with 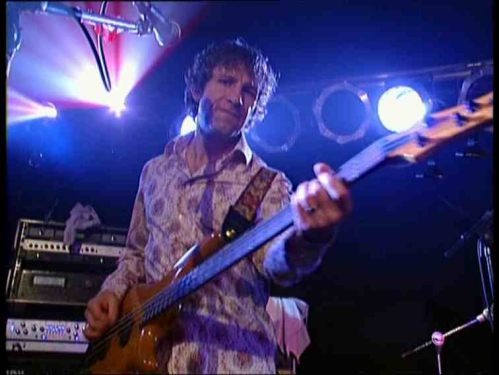 Matt Prior (Bonnie Tyler), Phil Beaumont, Paul Sturman and John Williams. This outfit will be hitting the The Walls Restaurant in Oswestry, England on February 15th, in a dinner/concert arrangement much like the famed The Walls gigs Marillion did a few years back. The music of the Stranger by the Minute band can be described as "The Commitments meets ZZ Top and you'd be halfway there", according to Rothery.

KINO:
John Beck (ex-It Bites), drummer Chris Maitland (ex-Porcupine Tree), singer and guitarist John Mitchell (Arena), and bassist Pete Trewavas (Marillion) with their new band KINO. On December 8th the quartet makes its first ever live appearance for WDR‘s “Rockpalast“ in Cologne. The debut album will be out in February. Please find a MP3 sample of their music on our homepage.

On this page you'll find some news too: Kino and a link to the members.

Pete Trewavas & Robin Boult: Acoustic industry (2011). Robin plays in the bnad of Mr.Fish.
Acoustic Industry is a sample of future work conceived and written on and for two acoustic guitars. Although the CD features other instruments either played or programmed by us it is essentially an acoustic album.