28 January 1945, Bristol, Avon, England. As the drummer, vocalist and guiding spirit of the original Soft Machine, Robert Wyatt established a style which merged the avant garde with English eccentricity. His first solo the excellent Matching Mole, was bedevilled by internal dissent but a planned relaunch was forcibly abandoned following a tragic fall from a window, which left him paralyzed and confined to a wheelchair. His second solo Rock Bottom ('74) was produced by Nick Mason. In '99 a 5-cd box sees the light, cover-paintings and layout done by his wife Alfreda Berge.

David Gilmour and;
Brian Eno,
Paul Weller,
Alfreda Benge,
Gilad Atzmon,
Annie Whitehead and, most importantly,
Karen Mantler. (The daughter of Carla Bley; she provides vocals, songs and even harmonica on a host of tracks). 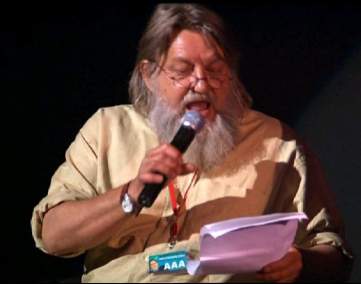 again Michael Manter ('88, with Rick Fenn who played with Nicky Mason too),

Ruijchi Sakamoto (Beauty '90, with Pino Palladina Youssou N'Dour and many others),

David Haines ('94 with Carla Bley among others),