NEWS:
May 2012:
Following a critically acclaimed New Blood tour in 2011 that reignited Peter Gabriel fans across the world by re-imagining his best known songs through stunning orchestral arrangements, Gabriel announced today his return to U.S. stages to celebrate the 25th anniversary of his groundbreaking, iconic album So.
Focusing on the entirety of that multi-platinum album, the tour, entitled BACK TO FRONT, will feature Gabriel with many of the members of the original band he toured with 25 years ago and will feature the albums songs from start to finish plus some of his other biggest hits.
Tour dates.

May 2010:
Peter has extended the 'New Blood', 'Scratch My Back' live experience to select European venues in 2010. The New Blood tour is Peter Gabriel, orchestra, no drums, no guitars

We're hoping to add dates for Verona and Zurich which should fall between the Barcelona and Mannheim concerts. We'll let you know as soon as we get confirmation.

You can get a glimpse of events around and inside the last tour with a look back at our Tour Diary.
More live pics here.

April 2010:
Aprils full moon sees the 4th of the double A-side Scratch My Back...and Ill Scratch Yours song swap releases on iTunes. The Power of The Heart and Lou Reeds reciprocal cover of Solsbury Hill.
For The Power of The Heart, a recent Lou Reed composition, Peter abandons its authors trademark gravelly delivery for an open vocal performance that, backed by unobtrusive piano and sympathetic orchestrations, places great emphasis on the songs uncomplicated but moving melody. Simple things can be the most profound.
Peter, Bob Ezrin and John Metcalfe talk about The Power of The Heart in a new video exploring the recording of the song.
Lou Reed chooses the iconic Solsbury Hill and gives it a radical reinterpretation. Unfortunately we didnt capture him on camera, but he told us how he had approached the song and gave his response to Peters version of his composition:
I tried to keep an open mind for this wonderful song I wanted to own it and redo its essence. I picked the version I and everyone else knows. I think Peter has tried to strike a balance between the demands of the marketplace and his desire for uniqueness. And intelligence. He has quite an arrangement in the Ezrin produced version. I choose to single out one desire and concentrate on that. The desire for a home.
Peters version of my song is overwhelmingly beautiful and I thank him for including me on this soulful journey through the heart. He has never sung more beautifully. This is a landmark album. Lou Reed

Oct 2009: Peter is involved with Nick Mason, Troy Donockley and a few other Bad Shepherds in this charity event. Please read more a Nick's Page.
But watch the clip first:

Video All you need is love.

Below you'll find news about his new album.

Live:
Peter Gabriel is bringing 'Scratch My Back' to select venues in the New Blood Tour (2010) - Peter Gabriel, orchestra, no drums, no guitar. More news at is website.
Tour dates 2010 at this page.


13 February 1950, London, England. After seven years fronting Genesis, Gabriel tired of the extensive touring and group format and went solo in 1975. He left the band with some great albums like Selling by the Pound ('73) and The Lamb lies down on Broadway ('74).
Until PLAYS LIVE, released in 1983, his four solo albums were all called PETER GABRIEL. The first included the track "Solsbury Hill," a metaphorical account of his split from Genesis which made the Top 20 in the UK. Peter Gabriel (1st LP '77): 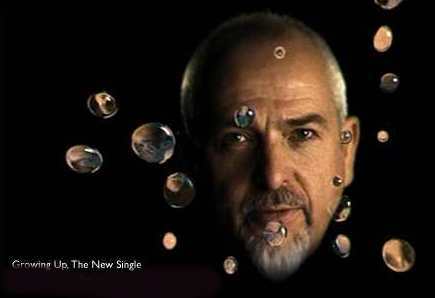 Unlike his earlier extravagant, theatrical presentations, he favoured minimalism and often played shows in a plain boiler suit. Robert Fripp was brought in as producer for the second album which made the UK Top 10 and just missed out on a Top 20 place in the Billboard chart. The album contained chiefly introspective, experimental music, but healthy sales figures were encouraging. However, Atlantic Records refused to distribute his third album in the USA, claiming its maudlin nature would mean 'commercial suicide'. Mercury stepped in and with Steve Lillywhite's disciplined production the striking collection was far from the flop Atlantic feared. "Games Without Frontiers" was a Top 5 hit in the UK and the track "Biko," about the murdered South African activist Stephen Biko, became an anti-racist anthem. Peter Gabriel (3rd LP '80): 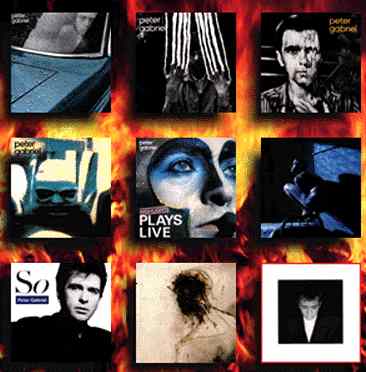 Continuing his deliberated approach, his fourth album, given the full title of PETER GABRIEL (SECURITY), was not released until 1982 and appeared to be hinting at a more accessible approach. A German-language edition of the album was also released. PETER GABRIEL PLAYS LIVE, was released by Charisma/Geffen in 1983;

Peter Gabriel (4 from '82, with songs like San Jacinto and the ultimate stage-diving-act; Lay your Hands on me):

Two years later Gabriel composed the haunting soundtrack to the Alan Parker film, BIRDY. The journey to complete commercial acceptance was finished in 1986 with SO, containing the US number 1 single "Sledgehammer" which was supported by a pioneering, award-winning video featuring puppetry and animation. He was celebrated as an artist whose work was popular without being compromised. A duet with Kate Bush, "Don't Give Up," also lifted from SO, became a UK Top 10 hit in November 1986.
So ('86): 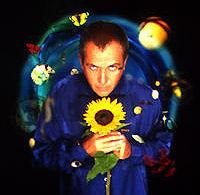 Throughout the '80s, Gabriel dedicated much of his time to absorbing world music and in 1982 sponsored the WOMAD (World Of Music And Dance) Festival. He also became heavily involved in Amnesty International and recorded with Senegalese star Youssou N'Dour. The pair toured the USA under the banner of Conspiracy Of Hope and raised money for Amnesty. He invited musicians from all over the world to record at his self-built studios in Bath and incorporated many non-Western ideas into his own music. In 1989 he wrote the score for the film, The Last Temptation Of Christ, released on a label backed by WOMAD. Virgin Records, the owners of the Charisma back-catalogue, released a greatest hits collection in 1990, SHAKING THE TREE. The title track was written by Gabriel with N'Dour and was included originally on N'Dour's album, THE LION. Although US fell short of the high standard set by SO, it put Gabriel back in the public eye with a series of outstandingly creative videos to accompany the release. Us ('92):

SECRET WORLD LIVE, one of the best gigs ever...said me, a real Pink Floyd affiniciado ('93);

OVO is his latest project at the Millenium Dome, with the stage-builder Mark Fisher (known from Pink FLoyd, the Rolling Stones and and and...)(2001); 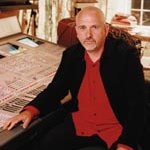 And in the meantime he married a girl called Mean Flynn on the island Sardinie; 09 June '02. Of course good old Phil was there too. Hope they've all a happy life. UP ('02):


A great album, a bit dark, a bit mysterious.

And of course he goes on tour, with: 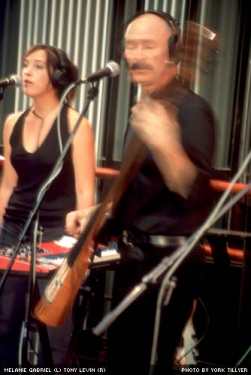 We had a great wonderful gig in Oberhausen... ;-)
With some pictures of his show and of course the right side Up. In the meantime a DVD of his Secret World Live is out, with a small impression of his new show. In the meantime this man has a lot of energy left to do some activity: he has no less than six album projects in the pipeline, in various states of completion. Let's have a look:

i/o: This should be the follow-up album to UP, which Gabriel will start working on properly later in the year. In the UP tour book, Gabriel states that "it shouldn't take that long to finish because a lot of the writing has been done and some tracks are already done". He hopes for a release in late 2004.

OVO2: This is basically OVO, but with Gabriel doing all the male vocals. It looks like this is being aimed at the US market and will likely be released before the end of the year.

UP Remixes: This is an album of remixes of UP tracks, which may or may not include remixes that have already been released as b-sides on UP singles.

Another Tongue: This is a project that has been mentioned a number of times, but details are sketchy. Apparently this will be Gabriel singing other people's lyrics to this own music. This album may also be called AT.

Twelve Lives: This one's even more obscure than Another Tongue. In fact, nothing more is known about this one than the title.

Odds and Sods: A collection of single b-sides and other rarities. <
Source: The Way They Walk (thanks to 'JJ').

Peter Gabriel must have noticed his former Genesis colleague enjoying a nice career revival by scoring songs for Disney, so he has jumped that bandwagon by penning the song Down To Earth together with Thomas Newman for the latest Pixar/Disney film Wall-E. At the moment it is unclear whether the song will be released as a single, but it is available for download through all the regular digital outlets, and also featured on the Wall-E original soundtrack album.

Mmm this is not the most spectacular video, but the music is cool.

"His" new album "Big Blue Ball" is really a nice summer break, from songs of the master himself till cheerful songs from Natascha Atlas, Papa Wembla, Karl Wallinger and more.

It's like a wall of sound coming at you, listening to the planet from outer space. It's a real world-view of music, a snapshot of the music-making continents at that time.
Karl Wallinger

And yes of course Pete is on that album too (3 tracks), more info at Big Blue Ball.


Recruiting a number of "extremely legendary artists" the resulting album 'Scratch My Back' is said to be set for a Spring 2010 release.

Speaking to BBC 6Music, Peter Gabriel collaborator John Metcalfe claimed that "the songs are not simply covers. They are major reinterpretations of some famous stuff. It's quite radical."

The largely orchestral album is due to feature material from the likes of The Kinks, Loud Reed, Talking Heads and more.

Not due for release for over six months, the tracklisting for 'Scratch My Back' has supposedly been leaked by a Japanese distributor.

Including some strange choices, Peter Gabriel is supposedly set to cover 'Street Spirit' by Radiohead amongst a host of other tracks. Arcade Fire's 'My Body is A Cage' is due to get the Gabriel treatment, as well as Magnetic Fields classic ballad 'The Book Of Love'.

The alleged tracklisting for 'Scratch My Back' is as follows:

Following from our recent post regarding the Peter Gabriel New Blood Live In London [DVD] – we now have updates on the 3D cinema screenings which will be broadcast in Australia, Croatia, Germany, Lithuania, Netherlands, Poland, Russia, South Africa, Spain, Switzerland, UK and US. For a list of these cinema screenings please click HERE. Peter Gabriel will also be a studio version of New Blood scheduled for release on 10th October 2011 ‘NEW BLOOD’ features re-imagined arrangements of many of Peter’s songs which dispense with the traditional weapons of the rock armoury – no guitar, or drum kits – the lyrics are exposed and laid bare, often taking new meaning with the passing of the years.

This treatment is applied with painstaking attention to detail and stunning effect to songs including ‘Digging In The Dirt’, ‘Don’t Give Up’, ‘Downside Up’, ‘Intruder’, ‘Mercy Street’ ‘ The Rhythm of the Heat’ and the spine tingling, atmospheric ‘San Jacinto’. Working together, acclaimed composer and arranger John Metcalfe, Peter and the New Blood Orchestra have given each track a new depth and a powerful significance. These tracks were recorded with a 46-piece orchestra, conducted by Ben Foster.