Bad news:
Mike Colman (News date: 3-2-10)
It is with great sadness that we have learnt of the untimely death of Mike Colman, who was a member of the pre-Genesis band Anon. Mike (who was known by the other members of Anon as Mick) joined Anon after Mike Rutherford was banned from playing the guitar by his House Master and soon started collaborating with Anthonny Phillips on a number of songs, some of which were played live by the group. Mike was also with the band when they recorded their first demo tape in April 1966 at the makeshift studio set up by their friend Brian Roberts and played with Anon at the Beat Concert at Charterhouse in July of that year where they shared the bill with fellow Charterhouse groups The Climax and The Garden Wall.
A talented musician, Mike played piano, violin and guitar and also enjoyed writing, having two books published. In 2003 Mike contracted pneumonia from which he never fully recovered and he passed away on January 12th.

John Matthew (June 2009).
John Matthew passed away in hospital on 26th March 2009 of a heart related condition. An interview with John can be found on www.genesis-news.com.
John played with Genesis between September 1969 and July 1970 and featured on the Genesis "Trespass" album. John left the music scene behind when it was believed to have emigrated to Australia in the late 70's, although later it was found he had only moved as far as Scotland. Although John did return to the stage in 2006 when he attended the Genesis Convention (with Ant Phillips and Steve Hackett).

This leading UK band first came together at the public school Charterhouse. The Anon, from Mai '65: Michael Rutherford and Anthony Phillips and Garden Wall (another school band from The Charterhouse): Tony Banks and Peter Gabriel. Record-boss Jonathan King met the guys from the Anon and after a demo with Tony and Peter he suggested the name Genesis and the first chapter is history. With drummer Chris Stewart the made two singles The Silent Sun and A winters Tale, which didn't get much attention. John Silver is the new drummer in June '68. From Genesis to Relevation, Moody Blues and Procol Harum influences is their debut album. Drummers they come and go; John Mathew is another new guy. Tony Stratton Smith offers them a contract at the Charisma-label: Trespass ('70) is made. Anthonny has a problem with the stage... and why not a new drummer; Phil Collins and Steve Hackett on guitar. And with these new guys Nursery Crime ('71) has more success. The cover from Foxtrot '72 is from the artist Paul Whitehead. The group grows enormously at their shows, Peter dresses up in funny costumes and he tells stories, the music is very complex. The next album is a live on with an very impressive guitar solo at the beginning from Michael.
Genesis increased their profile with the best selling album Selling England by the Pound ('73).

And Phillip takes care of the vocals of More Fool like me.

The Lamb lies down on Broadway ('74) is the last power explosion of Peter in the band on voice, flute, with variations of above and experiments with foreign sounds.
They searched long for a new leadsinger, John Wetton was an option, but good old Phil took the job.
Trick of a Trail ('75) and Wind and Wuthering ('76) are made as a quartet. Inside and Out is an epee released in Canada. Bill Bruford (Yes & King Kringsom) followed up by Chester Thompson (ex-Frank Zappa en Weather Report) on drums and on Second Out ('76 live).
And then were Three ('78) is a fact when Steve left the band and pursue a solo-carrier. And they've a first hit Follow me follow you. Daryl Steurmer (ex-Jean Luc Ponty). is the new live-guitarist, sometimes on bass.
Duke ('80) is album where the keyboards aren't the main-factor in the music. Banks and Rutherford are making solo-albums, Phil is busy with Brand-X and when he suggested that they could use some horns for a new album, the other two said no. So Phil made a solo-album too. So Abacab ('81) turns in to be an album with horns.... Three Sides Live ('82) is an album with one studio-side. The next phase is an reunion with Peter and Steve Womad-festival, 2-10-82. 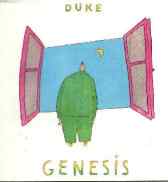 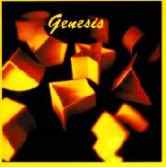 And Genesis goes popular with the mainstream-albums Genesis ('83, with one of their best songs Home by the Sea) and Invisible Touch ('86) is a new album with funny video's, such as Land of Confusion; puppets of Splitting Image. And 5 years later and many miles on the road there is We can't Dance ('91). With again most funny videos, pop, hits and symfo and a big life show with three move-able video-screens. "Lay your hands on the screen and give me 18 millions dollars by the weekend". from Jesus he knows me. Phillips is playing the funny man with new and very old jokes and Steurmer and Thompson are playing with fun.
The Shorts and The Longs are two albums of live-tracks ('93).
And then there are two; in '96 Phil Collins leaves Genesis! Mike and Tony are determined to give Genesis an third change. Audition are held for a new singer; Ray Wilson (from Stillskin). Calling all Station is the new album with Nir Zidkyahu and Nick D'Virgilio (from Spock's Beard) are the drummers. And the guys hit the road. After that adventure a ceedee-box with old and new remix material sees the daylight.

A DVD (2001) with all the members from Anthonny Phillips to Ray Wilson is another collectors item for the fans, called the Genesis Songbook. The fragments of old video's are to short, that is the only bad thing of it.
The "We can't dance tour" appears on DVD; sublime. Have Fun!

An interview with Tony Banks and Mike Rutherford has been posted on the Genesis-News website:


"Tony Banks and Mike Rutherford were caught after the soundcheck backstage in Hannover for a 20 minutes interview. Phil Collins was not there (he doesn't do many interviews when on the road) but Mike and Tony had a lot to tell about the tour, solo projects and future plans. Also, the question whether or not either Peter or Steve will appear on stage was discussed...

In other news, XL Video UK  via Blink TV - is supplying 15,089 Barco 510 O-Lite panels with 270 control boxes, plus 102 panels of Mitsubishi 16:8 high resolution screen in a record breaking 9 million pixel LED surface for the acclaimed Genesis Turn It On Again world tour. To find out more click HERE.
EMI have announced October 1st as the the firm release date of the next SACD/DVD box set. Genesis 1983-1998 features the last three albums the band recorded with Phil Collins at the helm, and the one-off with Ray Wilson.
The box will contain the four studio albums on a dual layer SACD (playable on all regular CD and DVD players) with the album in stereo and Super Audio surround. All albums contain a bonus DVD which contains the entire album in both Dolby Digital and DTS surround, as well as visual extras. The four albums will be available separately, but included in the box set is a fifth CD/DVD containing B-sides and rarities of the period.
The extras are a mixed bag. Not much live material has been included (as opposed to the previous box, where quite a bit of concert footage featured on the DVDs) but instead there's a lot of behind the scenes stuff and documentaries that have been unearthed from the archives for inclusion. Only the Wilson period seems a bit cut short, with barely any notable footage included, and not even all singles and B-sides present.
The full tracklisting is as follows: