John Wesley aka Wes Dearth, is an American guitarist.
Wesley's 1994 first album, Under the Red & White Sky on Racket Records quickly sold out it's first pressing of 10,000 copies. With:

Made another 2 good selling solo-albums, the last one is called The Emperor falls ('98), on which we can hear Steve Hogarth on backing vocals. And he toured as opening act for Marillion (in '92, '93, '95, '96, '97 !).
He met Fish at the Hadding fan convention, organised by Miles Copeland. After that he did the opening act aswel he played as axeman with the bold scot.
On the Fellini-album ('01) of Fish he let us hear how he can play. And live he is great too.
At the end of 2001 a new album release is in progress.


He'll hit the road with Porcupine Tree at the end of 2002 and in 2005 again.
Hope he liked the food in the Mexican Restaurant ;-)
Was nice seeing and speaking to you again John!

John Wesley has release a live CD, containing acoustic material from his Chasing Monsters CD and some B-sides from singles (summer 2003). Ten ('04). The CD is a celebration of 10 great years of music as well as an introduction to Wes' music for a whole new generation of John Wesley fans to be. "TEN" will include past studio tracks, a bonus live electric track of Waiting for the Sun to Shine and an ALL NEW DEMO MADE SPECIFICALLY FOR THIS CD of a song to be on the forthcoming 2005 studio release. 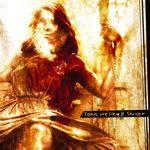 Shiver - Behind The Music is his new release and will be available at his site and at the running Porcupine Tree show ('05).


Another John Wesley Band Performance.
Hi all, I have a new John Wesley Trio show date to let you know about. The John Wesley trio will be performing Feb 6th at Gasoline Alley in Largo, FL. The lineup that night will be:

Please visit this guy at his website and get some free downloads www.john-wesley.com.


And of course you can see his excellent guitar playing and singing at Porcupine Tree live DVD Arriving Somewhere.

www.myspace.com/johwesleymusic
Go to John Wesley to have look at the official site.
With fre downloads like the emotional track "Thanks Giving".