Paatos is a Swedish rock group based in Stockholm.
First formed in 2000 and started out as a rhythm section backing up swedish Folk Rock singer Turid.
The band shows influences from a wide variety of styles and genres. Some call it Post-rock, others Progressive, and Goth is sometimes referred to. Paatos has described their own music as Cinematic Rock, despite their reluctance to categorize or pigeon-hole their musical expression.

Timeloss was Paatos first studio album and was originally released on Stockholm Records in 2002 to then be re-issued on Inside Out in 2005 with two bonus tracks and a video.

2004 Paatos records their second album Kallocain. They had recently signed with Inside Out who organized a live broadcast on Rockpalast in Köln. This footage was included in part on a luxury edition of Kallocain. The album was mixed by Steve Wilson from Porcupine Tree.

Silence Of Another Kind (referred to as SOAK) was released on Inside Out in 2006. This was followed by extensive touring around Europe to promote their album. Paatos both headlined and opened for Porcupine Tree.

While on tour the band recorded several of their shows which resulted in a live album they called Sensors. The recording was first released in 2008 on vinyl on the mellotronen label and later that year on CD in Japan on the Arcàngelo label. 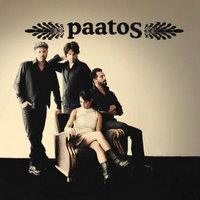 In 2009 Paatos starts writing and recording music for their fifth album, Breathing. This feature their new bass player, Rockis. Their collaboration with Inside Out ends and they sign with Glassville Records in Holland. In conjunction with this release Paatos makes a video of the first song of the album, Gone (2011).


Tour dates in November 2012 are canceled!