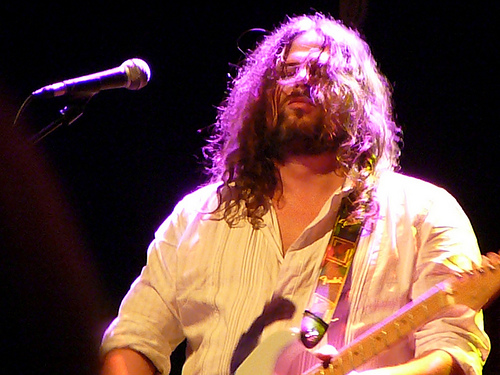 A review from James Alan:

We went to see Mostly Autumn at the Shepherds Bush Empire on Saturday 28 February, for a show which was being recorded for a live cd release. Standing in the queue before going in, I was told that due to a bad cold, Heather Findlay had had some problems with her voice the previous night at Manchester, and Breathing Space's Olivia Sparnenn had shared the lead vocal duties. Now that would have been very interesting to experience, but as it turned out, Heather's voice stood up very well to the demands of this gig. There were still some surprises in store, not just within the setlist, but also in terms of personnel - I had seen Panic Room's Gavin John Griffiths walking by with Breathing Space's Iain Jennings to get some food before the gig, but I did not expect to see him behind the drum kit when they came on. Not that I was disappointed - I think he is one of the best drummers out there, having seen him a number of times recently with both Panic Room and Fish, and he put in an excellent performance here.

The set itself brought together the very old and the very new, and should make an excellent live cd. They came out to a packed venue, on to a stage bathed in violet and blue light, and went straight into Fading Colours, from 2006's Heart Full Of Sky, and were off to a flyer, the sound quality was very good, they looked very good on this bigger stage, which bassist Andy Smith was clearly enjoying, and there was already a sense that everyone was enjoying themselves; and they continued in to Caught In A Fold, from 2003's Passengers, which really rocked along and featured some lovely flute from Panic Room's versatile Anne-Marie Helder. Flowers For Guns is a poppy little number and is the first one from their latest album, the excellent Glass Shadows, with an acoustic opening from Liam Davison, some wonderful backing vocals from Olivia and Anne-Marie, and there are so many layers to the track and it builds so well, and also features some more wonderful flute from Anne-Marie. It is in the build up to Unoriginal Sin that Heather mentions her voice and her current illness, and it just makes it even more remarkable that she sounds so perfect tonight, and is clearly putting everything into her performance, and into a powerful performance of such a personal track. They make this such an atmospheric track tonight, Gavin's drums are very prominent in the structure, and Bryan Josh pulls off a soaring guitar solo - just one of many from the great man tonight. Simple Ways is another from Passengers, and sees Liam and Anne-Marie on acoustic guitar, behind a haunting guitar intro from Bryan. There is a heavy blues feel to the track before it opens up with Liam back on electric guitar, and Anne-Marie takes the acoustic break, before we get a really strong, sharp ending. The band are tight, and on top form. Evergreen is epic, classic, sublime, performed perfectly, Bryan and Liam's guitars combining so well, Heather's vocals absolutely gorgeous, and the class of this song defies written description. It is followed by another from 1999's The Spirit Of Autumn Past, with Winter Mountain having a more rocky uptempo feel, pausing before it builds and is gone again, a false ending before it is gone another time, and Heather is making use of the stage space to spin and dance and it is a wonderful performance. There is a clapping start from the audience to The Dark Before The Dawn, from 2001's The Last Bright Light, which sees Heather on whistle and Anne-Marie on flute in a really rocking number, a screeching guitar solo from Bryan, and another false end before they carry straight into Answer The Question, with excellent keyboards from Iain. And then a track which Bryan introduces as one which they have not played for many years, and we have a more mellow opening to The Last Bright Light, Liam on acoustic, a very atmospheric sound, working perfectly in this venue, it kicks off into something more rocky before calming again, and some more clapping from the audience leads us into a roaring guitar solo from Bryan.

Above The Blue is a beautiful ballad from Glass Shadows and Heather does so well with it tonight, and not only because of the strain it must put on her voice. Conscious that they are recording this performance, she stops part way through because a snare drum has been left on, and she sighs "drummers". Then "blah blah blah Above The Blue" and she starts again...only for the security man's walkie talkie to go off, but they continue. It begins softly with Heather singing along to Anne-Marie's keyboard part, before Iain comes in with some much deeper keyboard sounds. Sublime. The band return for Half The Mountain, with Bryan on vocals and Heather on acoustic guitar, and Liam is on electric guitar with Anne-Marie on flute, and there is a wonderfully big sound to it all, and a lovely crescendo of sound explodes into a brilliant solo from Bryan. Then a big guitar intro from Bryan into Nowhere To Hide (Close My Eyes) from 1998's For All We Shared, and the band are really on a roll now as there is a massive opening to Broken Glass from 2005's Storms Over Still Water, big clapping from the audience, the band quite simply having fun, and everything bouncing along very nicely indeed. Never The Rainbow sees Olivia join Heather for dual lead vocals, and there is a fast paced opening to this uptempo rocker, and the vocals seem so effortless for Olivia. Iain produces a jaunty keyboard solo before Bryan gives us a subdued, floating guitar solo, and then we have Olivia mirroring his guitar sounds, with the drums and bass providing some backing, and Bryan takes his sounds higher, and Olivia follows, and higher still, and the upper end of Olivia's range had to be heard to be believed, it was so precise, a truly beautiful sound, and again seemingly effortless from her - that will be a moment of joy once the live cd comes out. Pocket Watch produces a wonderfully poignant moment as Bryan opens the verse with "We've got a crazy diamond...cheers Rick" and gives a nod to heaven for Pink Floyd's Rick Wright, who very sadly passed away towards the end of last year. The track has a great feel to it, not least some excellent guitar work from Liam, who continues his fine form into The Spirit Of Autumn Past, which also sees Heather on acoustic guitar, and Anne-Marie's flute takes us into a sound of triumph. I love Heroes Never Die, and they produce a stunning version. A gentle guitar intro from Bryan, Anne-Marie's flute and Iain's keyboards, Bryan's vocals being joined by Heather's so perfectly - this is their sound. The many crescendos which lead into the solo are outstanding, and the solo itself is breathtaking, the bass cut-ins providing necessary pauses as it grows and grows. The band have now been on stage for just under 2 hours and they really are playing as one, producing a most wonderful sound, a joy to experience, and each one is integral to what we are witnessing tonight.

There had to be an encore after a performance like that, and what a strong track to be able to bring out at this point - Tearing At The Faerytale, a truly epic number dedicated to Olivia's father, Howard. Liam is on 12-string acoustic and Iain introduces a lovely keyboard part, but this track is all about Bryan, his voice, and what he does with his guitar to drive the number on - his guitar has got such a powerful sound to it through the track, and he gives it a feedback ending. There is then a discussion between Bryan and Heather - he is asking if she is up to performing Carpe Diem, and quite understandably she is saying that she is not, and looking very apologetic about it - I do not think anyone there would fault her after her performance through her cold and throat problems on the night ! But it's not quite over yet as Gavin starts up on the cymbal, rhythm guitar comes in, some lead, bass, keyboards and we're off, into a bouncy cover of Genesis' Turn It On Again, and a very appreciative crowd clap through to the end. It has been an excellent evening, and in a world which currently can very easily turn you to despair, Mostly Autumn offer hope and optimism through their songs and through their performance. They are off on a short tour of the Netherlands at the beginning of April, and then back in the UK at The Venue in Stocksbridge, near Sheffield, on 24 April. Go along, have a good time, and come away smiling. 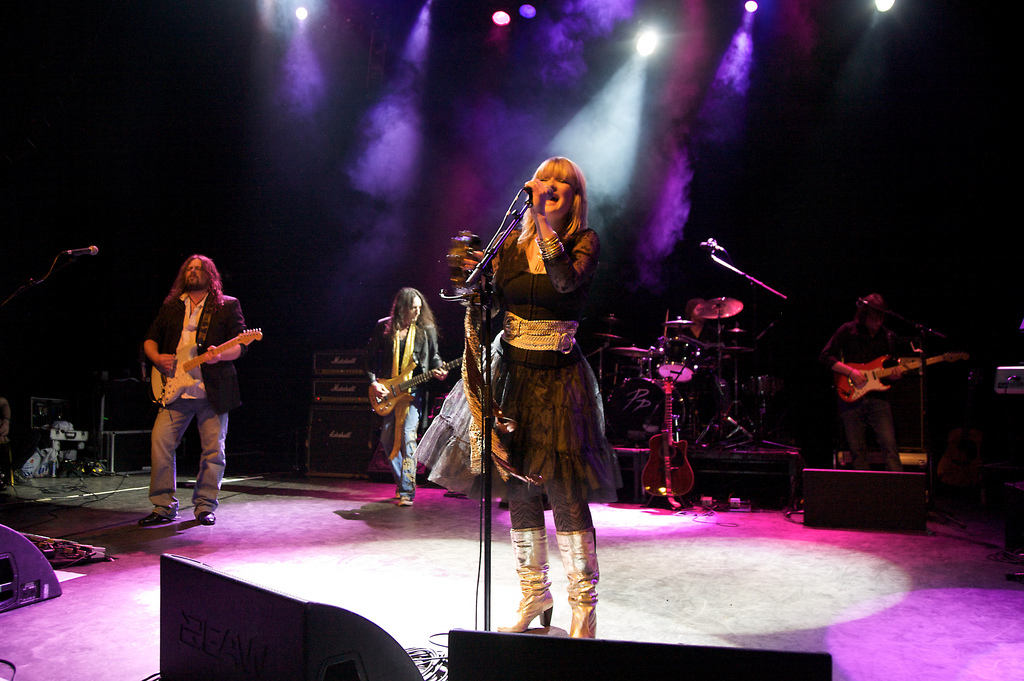 Through these Eyes is Bryan Josh's new solo album.
Soft Rockin'songs with a nice byte. If you like the softer side of Mostly Autumn, this will be a good buy. Don't hope it's proggy it is not. Just great tunes with heavenly guitar work an sometimes very funny lyrics.
I'm impressed by this release.
Well done BJ!
A review you find here. And a Dutch review from the Io-Pages at this spot.

An interview with Bryan is on this page.