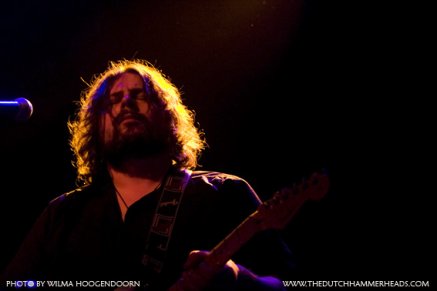 [Nick]: Hidio Bryan, what are you doing on this moment?
[bryan]: At this moment I am starting the writing of the next Mostly Autumn album which we hope to record either this summer or autumn. Also planning autumn winter tour for MA and possibly some dates for Josh & co.tld.
[Nick]: It's you and Heather again hat write all the stuff?
[bryan]: Heather and myself generally do all the writing these days so I would imagine that will be the case, we are the nucleus of the band and musicians can alternate in the line up so we feel it is best this way.

[Nick]: You already know what the title of the new album will be?
[bryan]: We have no title at present, only a few loose ideas, its very early days.

[Nick]: Will be different then the last release?
[bryan]: I think all our albums differ in sound so yes I think it will be but it will still have the MA stamp. I think you can in a way compare MA more to something like the Alan Parsons project in the way that each album takes on a different theme and atmosphere but most songs are just about life, observations and of course strong emotions.

[Nick]: Why did you wanted to make an own album?
[bryan]: I have wanted to record a solo album for some time and the timing was just right last year. I think there is room for more music in and around the MA camp and I dont feel it will encroach on MA at all.

[Nick]: It became a happy sounding Mostly/ Gilmour album. Some songs are really funny, we don't hear that in Mostly Autumn songs. But some songs could be on a Mostly album too. "Through these Eyes" is the title track, what's the track about?
[bryan]: The humor just came out, and it was as genuine as the more serious stuff, I truly think I border on two extremes, very serious and ridiculous. Through These Eyes is a snapshot of me wandering around in another dimension observing everyday life there and characters that I have strong feelings for happen to be hanging out where I was hanging around, me and Ceasar got on like a house on fire ha. 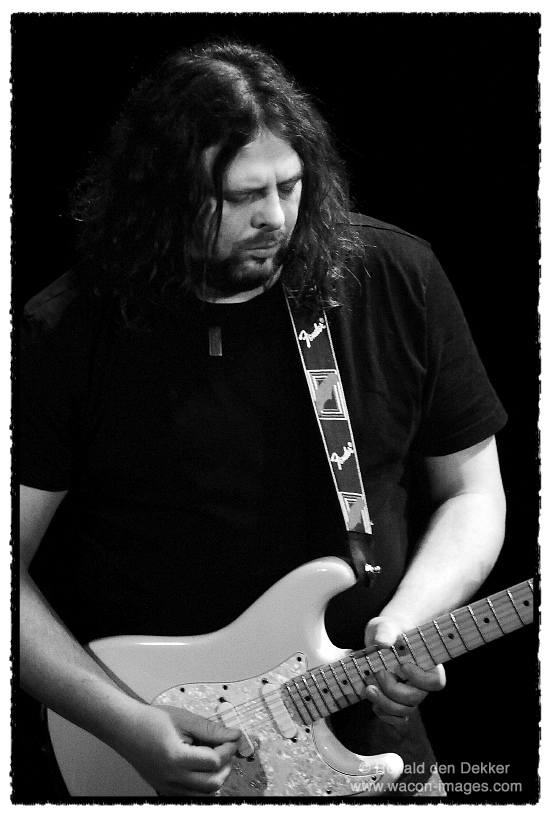 And "The Appian Way" is a really cheerful song with a good catch, could be a single. What do you've with the Old Rome? You've traveled along the Appian Road?
[bryan]: Yes I have been along the Appian way, I am very interested in the Romans and all they achieved, Im also in love with Rome, it blows me away, the atmosphere there is incredible, like a far away dream. Last time I was there I nearly got arrested for wearing some tight 70s swimming trunks near the Colosseum, that wasnt good.

[Nick]: Some songs are really emotional, that's one of the trademarks of Mostly Autumn isn't?
[bryan]: Yes, there is a lot provocative emotion on there, very much like MA, its just the way I write, very much from the heart.

[Nick]: Is there any chance you'll get on the road on your own, with a band or acoustic?
[bryan]: We will go on the road but it will have to be with a band, just like on the album, it has to be that way.
[Nick]: Cool! hope to see you on the Dutch roads as well.
You did recorded the shepherd Bush gig (28 of Feb) in London for a live cd.
[bryan]: Who knows...
We recorded the Shepherds Bush concert but will need to record some more shows as Heather had a bad throat infection and it wouldnt be fair to release it like that.

It is with mixed feelings that I have to announce that we will be postponing the release of a live album until we have recorded several shows in the upcoming spring tour, we will inform you of which ones in the near future.

Over the last few years I personally feel, and Im sure many of you will agree, that Heathers voice has been moving forward and being expressed more beautifully than ever before, and is totally world class and would stand up against any other female singer I have ever heard. Therefore with the extremely unlucky scenario of Heather picking up a very nasty throat infection two days before the London show, I do not feel it would be fair on Heather, us and you, to release a record that would include a lead singer who is performing well below their normal potential due to illness.

I do believe that on the night we had a great concert and we all did have a great time but after listening to the recording it is absolutely clear that we have to give this another go.

Coupled with this we had a very loud venues walky talky bleeding onto all the microphones during Above The Blue which in effect renders the song unusable.

I really am sorry for those of you who were looking forward to this recording, it is not ideal for any of us but in the long run I hope you will thank us for this decision, a concert is a great passing experience but a record is for life and we want it to be mind blowing.


[Mark]: How did Mostly Autumn started, what is the history?

[bryan]: Well the main band started 12 years ago, wen i lost my father in '96, i started to write song. We did some gigs and recorded our first album called "For all we shared". From that point it develloped from there, we started to gig around and got a record deal. And we're profesional since 2000, the band was born out emotion. Songs about, losts about life. 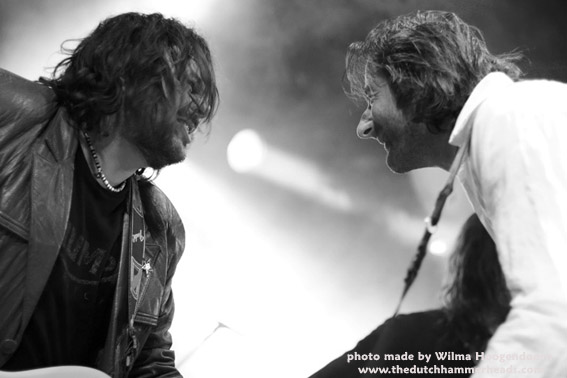 And how did the name came along?
[bryan]: Autumn was always something i wanted, it's about a feeling... i always loved the season. The reminiscing ... the feelings started wen i was kid and spent holidays seasons in the Lake District. I was a kid wen i saw post card with Mostly Sheeps, but i couldn't see the sheep... so it became Mostly Autumn.

[Mark]: Have you been in other bands?
[bryan]: Yes, i've in plenty rockbands, since i was 13, then i got a job as engineer. Then i left in '98 and started to write songs, the Night Sky as the first one, and wen i lost my father that and teaching guitar, the energy of the lost of my father was pushed in this bands.

[Mark]: What is your inspiration musical wise.
[bryan]: I grew up with Pink Floyd, you know, from camping in the Lake District, listening to the old stuff, SOYCD. Medle, but also Genesis. My older brother was playing that all to me, Floyd, Genesis, Deep Purple, Supertramp...

[Mark]: Listening to your guitar sound it's to similar like David Gilmour.
[bryan]: It's in the blood, thank you, i can get it out you know, that's how i play. I play about feeling, people often say that, and i don't mind that.

[Mark]: Late Richard Wright was saying good things about you...
[bryan]: He was mad, those guys were in head of us. He did it on radio 2.

[Mark]: Tragically that he died.
[bryan]: Yes it is, i grew with up with their Music.

[Mark]: You played some Floyd songs.
[bryan]: Yes we did, but we didn't played any floyd stuff for years. 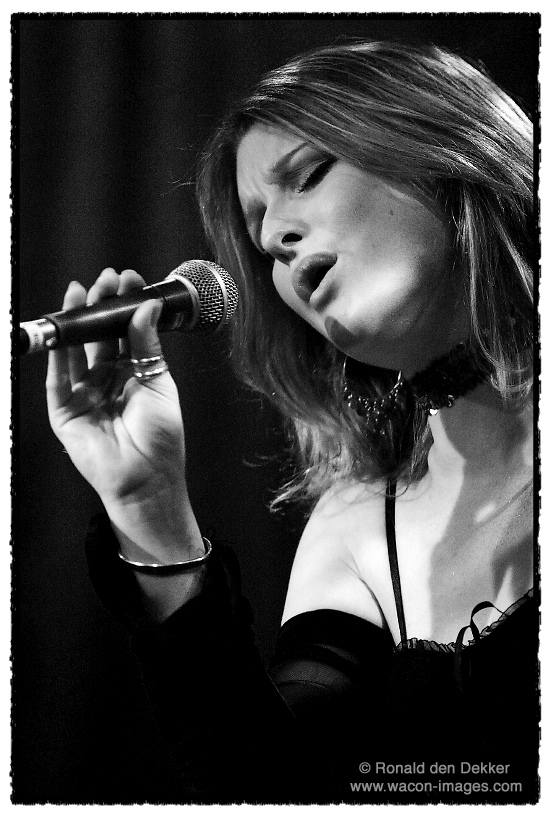 Heather is the main vocalist, i'm more the writer and guitarist, she has beautiful female voice and she 's phenomal writer as well.

[Mark]: Thanks for the interview, thanks for keeping my family awake in the car.


Mark Hately
This interview was broadcasted at Marks radiostation.

Through these Eyes is Bryan Josh's new solo album.
Soft Rockin'songs with a nice byte. If you like the softer side of Mostly Autumn, this will be a good buy. Don't hope it's proggy it is not. Just great tunes with heavenly guitar work an sometimes very funny lyrics.
I'm impressed by this release.
Well done BJ!
A review you find here. And a Dutch review from the Io-Pages at this spot.

Pictures by Wilma Hoogeveen/ the Dutchhammerheads.