THE STORY SO FAR.

In the meantime they released a live DVD and CD and they're touring with Uriah Heep.

Never the Rainbow with Marc Atkinson, Rachel Jones & Gina Dootson.
This song is still on their set list, but different....

THE UNEXPECTED ALBUM
MUSIC INSPIRED BY THE LORD OF THE RINGS (03 December '01). 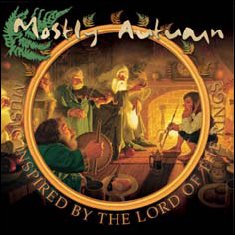 My favourite book and then music of Mostly Autumn... The CeeDee is done in 14 days, the book is done in 30 years. For the book was that the right time, but i believe they should have took a few moments more for this CeeDee... Neverteless there a few highlights on this album, maybe this album isn't their best album. I bought the album the same night that i saw, The Lord of The Rings... the film did shake my whole body and more, maybe that's why the album was a little dissapointed. Tom my son of 10 did like the movie too ;-)

So this was not the new best of tracklist.

There are plans for a new album, release date; autumn 2002. Geoff Richardson (Caravan) will play some violins on the new album. 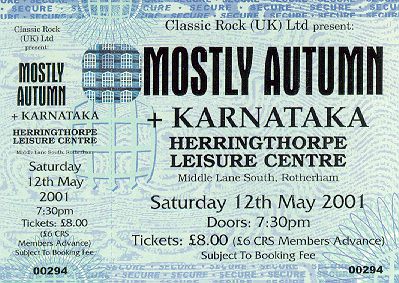 Together with Karnataka, Asia, Uriah Heep they performed in the U.S.A; 5 - 6 october 2002. The Dutch and Belgium gigs were canceld ;-(.

Is the new best of album to conquer the States. For me it's overdone... sorry guys. Althrough the price is very nice for a double album! Hope new fans will find their way to it.
The tracklist you'll find here.


The Albums, click on the titles for more info.


Back to Mostly Autumn