Sam Brown at the Olympia with David Gilmour. March 2006.
Picture by Vincent Dachelet.

Spirits of the Forest ('89 with David Gilmour),

Jools Holland (Together Again '91 with David Gilmour, Hop the Wag '00 and also live on tour and on his album Small World Big Band, with a disappointed Valentine Moon, but she looks good on the picture, she always looks good...;-),

Fish (Just good Friends, '95) a great single, Sam was pregnant when they recorded it,

see the booklet of the next item (!)

Stereophonics You Gotta Go There To Come Back (2003)

Jon Lord; classicalish album Beyond the Notes ('04 and live), 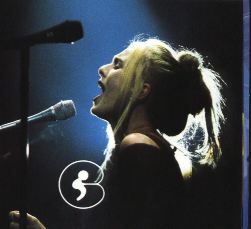 David Gilmour (This Feeling and I'll Be In Love).

('90) with David Gilmour on Troubled Son, the bass-player is Chucco Merchant, he and Sam played with Gilmour in June 2001 & Januari 2002.

Tour News.
Sam will be touring the UK in spring 2006 with her one-woman-show: Just Sam, her piano, ukulele and bass guitar creating a charming, revealing and highly charged atmosphere. She's also doing a couple, hang on, make that three, special intimate new year shows in a nice pub.
So she'll not being doing a tour with David Gilmour .... ;-(
But she did a guest apperance in Paris on 16 March 2006; a "Great Gig In The Sky". Wauw, wish I was there!

On her last album, About Love And Life, are playing;