7-8-49 Born Timothy John Pearson Renwick into a musical family in Cambridge, England.
So he plays guitar and he does it very nice!
Together with Syd Barrett he was a scout. He was sitting in a bar when his friend David Gilmour came to tell him that he, David, was asked to come and play with The Pink Floyd. And yes he was stinky jealous.

They made one progressive album ('69) and the line-up ended in the Hype a live-band for David Bowie, later they all did some session for David. The bands with David Bowie changed a lot, a moment of time the line up was:

Quiver, they played sometimes as support act of Pink Floyd.

With The Sutherland Brothers, Quiver played again as back up band, David Gilmour was a few times with them; Reach for the Sky '75, Arms of Mary 19??.

Tim has recorded only one solo album so far ('80).

His new album Privateer will come out in spring 2008.

Gary Brooker (Lead me to the Water & Echoes of the Night '79/'80, also starring Eric Clapton), later on he did some touring with Gary/ Procol Harum.

Andruw Powell (The Best of The Alan Parsons Project '83),

live with Roger Waters with Eric Clapton ('85), (he didnt liked it, although he and Eric did get well. So he played later on a tour with Eric).

Pink Floyd; A momentary Lapse of Reason, live and live again with Pulse, 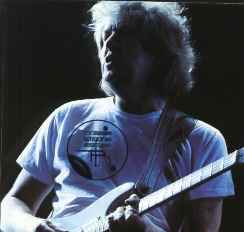