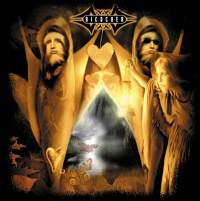 Dutch progressive band. Quest of the Heartland is an album that is too short (42 minutes):


Cathedral Of Emotions ('02), is the first long-play studioalbum of the band. Nine songs with emotion as floating power.
Because Ricocher searches the boundaries of progressive symphonic rock, the album is a nice mix of music with a lot of quality, which is nice to listen to for a lot of different people.

In 2004 another highlight hits the scene; Chain. Again with nice art work of Mathias Noren.

Ricocher have a new singer. 28 year old Rock Hoekstra will replace Erwin Boerekamps who has announced that he is leaving the band after the gig scheduled at Reichenbach (Germany) on November 4th. Hoekstra was previously lead singer with Dutch prog band Splinter.

January 2006
Ricocher has split up! The band no longer excits... what a shame.