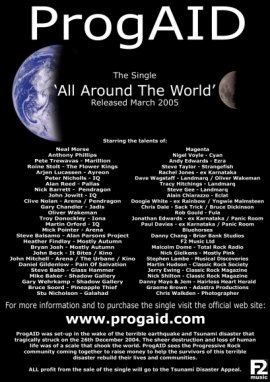 Finally, after 2 years of the relase of this fantastic single, the money that was raised is giving away to Save the Children.
The money; 10.500 Euro wil be spent to children in South East Asia.
So everyone involved in this project (50 musicians!), thanks! A special thank you to David Robinson of F2 music, Rob Reed & Matthew Cohen.

You can still buy this single at ProgRock.co.uk. 5 English pound all inclusive.... 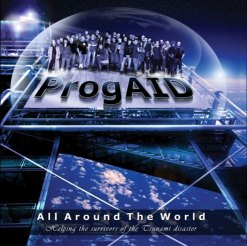 We are happy to inform you that we are currently planning to release a CD Single to raise money for the victims of the Tsunami disaster in Asia.

All artists will be giving their time for free and all profit from the sale of the single will be given to the disaster fund. We hope to raise a lot of money.

We have invited a number of great musicians to take part and we will publish details here as names are confirmed. We have booked a recording studio and hope to record the single at the end of January 2005 and have it available for sale by the end of February 2005.

Please help us by supporting this release.

The first version of the song is written and called "All Around The World" (it is an old Cyan song).
The new version will be recorded in a studio in Penarth/ Wales.
Rob Reed is in charge to produce it.

Once recorded, the single will go on sale, which is expected to be late February 2005, and all proceeds will go to the charities that can help the victims of the Tsunami disaster.

Interviews with some of the members of this Project.
Steve Gee, Martin Orford, Stuart Nicholson, Nick Barrett and Matthew Cohen. Hope some more will follow.

Here you can find the Lyrics of the original song and a sound sample.

It has been a tremendous 2 weeks and we have an incredible stable of top flight musicians on board. Recording has begun already with people from around the world sending in their contributions and we can tell you that they are quite brilliant. The jigsaw is building and it promises to be an amazing piece of music to hear. Recording here starts on Saturday and goes through to Sunday, just to accommodate everyone involved and we are pleased to announce that Classic Rock Magazine are covering the day and so is Total Rock Radio, with live, on the air updates as things happen. So tune in. Thanks to everyone for their support and speak to you all very soon.

Hello to you all. Well we now have the official release date. The 14th March 2005 is when "All Around The World" will be available to buy. The infrastructure facilities to buy the single are nearly in place and come the Monday 7th March, we should have everything in place ready to go. The track listing is as follows -
The video documentary is a real treat for all who want to see what happened on the day and will make you all feel closer to the event. It's fun to see allmost all your heroes in one clip.
The songs and mixes are sounding fantastic, a real beauty Great voices and solo's. Have you ever heard, a solo of Nick Barrett, Bruce Soord, Bryan Josh, Arjen Lucassen, Roine Stolt, Gary Chandler and John Mitchell in one song? (And i probably missed a few chords!). And there are some real creepy keyboards solo's , Ulliann Pipes, Flute, Violin, Harp, Percussions, some ingenious bass lines. That's is Prog how we like it, excellent performances, best of the best of what people can achieve and that all for one goal. My heart is stolen and i got only one question:
How did Rob Reed get those 125 tracks to such a wonderful complete mix?

We can also now confirm that Jerry Ewing will be hosting his ProgAID special event on Saturday 12th March on Total Rock Radio. Many of the musicians involved on the day will be interviewed plus an exclusive pre-release playing of "All Around The World" plus the mixes will be played. If you want to ask your own questions, then just log on to www.totalrock.com and ask away. Thanks again and keep up the support, it is needed and appreciated.

Thanks and take care.

Interviews with some of the members of this Project.
Steve Gee, Martin Orford, Stuart Nicholson, Andy Edwards, John Jowitt and Matthew Cohen. Hope some more will follow.

A special word to Matthew Cohen, David Robbinson and Rob Reed for all their faith, support, perseverance and their courage to set this up. And of course to everyone who is involved all around the world.

Nick of the lovely South of the Netherlands.

There're more Musicians who wants to help and rasing money for Asia. On my news page you can find some of those projects too.
Buy it here!

Please be so free and sign my guestbook.
www.mostlypink.net

Do you want to help?
Think this is a splendid idea:


www.sms4life.com.
(At the bottom you'll find an English version.)