After the release of one of the best debut albums ever ("The Script of a Jester's Tear") and a few live gigs he left the band.

Together with Clive Nolan in Arena (since '95), in the early days a sub-clone of Marillion. But nowadays a heavy Prog Band with great success.

And finally he comes back with:
The Script; in 2008 with;

They played the whole "Scrip for a Jester's Tear"-album (on which Mick played drums) and some oldies of Marillion.
In 2009 he did his trick again and with success; i witnessed, again, a wonderful show and had some excellent flashbacks from Marillion second gig in the Netherlands ('82?). 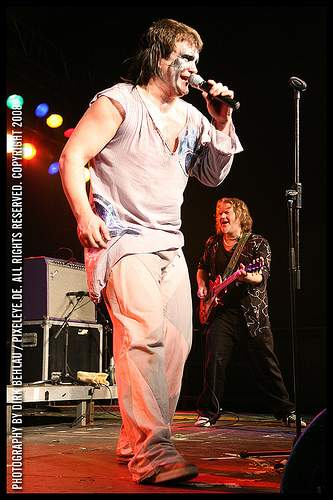 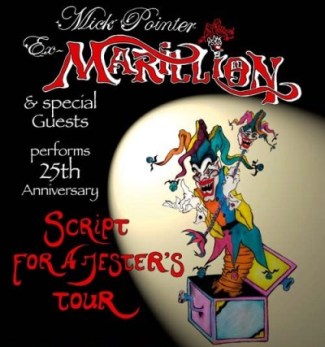 Here he is once moreIn the tour-bus I meet the former Marillion-drummer during his second tour to celebrate Script For A Jesters Tear. Ready to face the old and new progheads who still cant get enough of this incredible debut-album. An idea based upon a tour from another famous ex-Marillion member.
[mp]: Well, about three years ago I was on tour with my band Arena. Parallel to that tour Fish was taking Misplaced Childood on the road for a 20th anniversary. I thought it was a very good idea to do something like that. I talked to some people to find out if they were interested in doing a tour to celebrate the 25th anniversary of Script For A Jesters Tear. This album is my period of Marillion and all music from that period is relevant to me.

There is no other Marillion-member involved in the project. Hasnt he had any reactions from his former colleagues?
[mp]: No, I havent had any reaction of anybody and I wouldnt care if they did!

Marillions stunning debut sounds still fresh and hasnt lost any of his magic since its release 25 years ago. Many classic albums have this timeless touch, but according to Mick this magic is something that just happens.
[mp]: I dont think you cant create a timeless piece of music. Its just one of those quirks of live. Out of a 1000 albums that get made, one becomes classified as classic. We didnt know that at the time of writing and recording it. You just write what you want to write, and do what you think is a good idea. Out comes it, what came out of it. You also cant force someone to love an album. They do, or they dont. But Script was particularly special to a lot of people and its a shame dont playing that music anymore. Even Marillion doesnt! For me its a good opportunity to do it.

A chance to give Script the honor its deserves by playing it entirely plus some b-sides and well known encores. Mick depends on the original performances from 1983.
[mp]: You have to do justice. The pieces of music were written as they are, so you do them as they are. Occasionally we add some things, but in the whole its best not to play with it too much. When you listen to it, you listen to how its done and you want to hear that on stage. So the whole purpose of doing it , is to give people the opportunity to give what they want.

None of the original Marillion-members is involved in the project. Theres an exact Fish-look alike and band members that come from other bands.
[mp]: Ian Salmon comes from my own band Arena. Nick Barret from Pendragon is an old friend of mine. I know him for 30 years. He hasnt done anything besides Pendragon, but he loved the idea of doing it. Keyboarder Mike Varty is someone I know for 15 years because of his work with Shadowland, Credo en Janison Edge. But finding a vocalist is the hardest part! We even flew someone over from Canada because there are a lot Marillion-tribute bands out there. But they were rubbish or awful! Then we tried Brian Cummings from the U.K Genesis-tribute band Carpet Crawlers. He is an extremely good Peter Gabriel, so I thought maybe he can do a good Fish. He made to right movement to be an actor and play the Fish from that period. With his performance he takes people back 25 years ago. Thats want I wanted to achieve. He doesnt try to be Fish, he just plays that part in an extremely good way. Its required for him to do that. 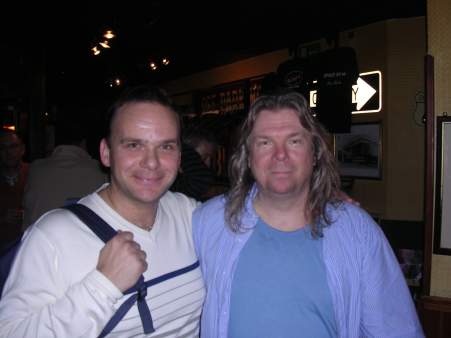 Over the last few years we havent heard much from Arena. There were some small tours and a compilation- release. But some fans are tired of waiting!
[mp]: Of course I like to do something with Arena because we need an album. Everywhere I go people are asking me. At the moment everyone in Arena is doing different things, but we need to get together and do it. Believe me, its coming.

Mick thanks for the answers, see you.
Michel Scheijen.