Guitar. Anthony Phillips was one of the founding members of Genesis, having attended the Charterhouse School in Surrey with Peter Gabriel, Tony Banks, and Michael Rutherford. Phillips and Rutherford (who had played together in another band before linking up with Gabriel and Banks. The succes of the band forced Anthony to reced into the background, propelled by a crippling onset of stage-fright that forced him out of the line-up and went back to school. Made a lot albums from symfo till New Age (Private Parts & Pieces I t/m XVI) His debut The Geese and the Ghost with; 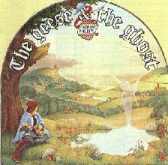 Wise After The Event ('77) is his second solo-album with Rubert Hine, Mel collins and more boys and girls.

Radio Clyde ('03). A "live in the studio" session recorded at Radio Clyde in Glasgow in the Summer of 1978. Solo -performing of the master himself.

Ant and Harry Williamson's large-scale orchestral work Tarka is due to receive it's World Premier live performance in Melbourne Australia in February 2010 as part of a unique Community Music and Water Event called Precious Music, Precious Water. Ant has assisted with the preparation and checking of the scores for the concert as some parts from the original required re-scoring.
Ant is unfortunately unable to attend the concert so his original parts will be played by guitarist Doug De Vries alongside Harry Williamson. Doug and Harry will be joint soloists with the Whitehorse Orchestra, (conducted by Gerald Keuneman) for the performance of Tarka.
The concert is taking place at the Melbourne Town Hall on 27th February 2010 and there will be two performances at 2 pm and 7.30 pm.

Ahead Of The Field is a library album which Ant composed for music publishers De Wolfe/Rouge Music. Originally commissioned in 1984, it's now being released as a commercial album for the first time. The album's primarily a showcase for Ant as a composer rather than a performer. As a library project it had a number of requirements in the initial brief, a key one being the use of then-contemporary electronic drum and synthesiser sounds.

In 2 weeks time we'll also be accepting pre-orders for Ant's Sail The World 2010 reissue. Ant has again agreed to sign all pre-orders! Sail The World (originally released in 1994) features music composed and recorded by Ant for the TV coverage of the Whitbread Around The World Yacht Race. It's a remastered reissue with 3 extra tracks and new artwork!

Seventh Heaven (2012) is a double album of co-written orchestral and acoustic portraits (featuring some outstanding arrangements by Andrew) which have been recorded by the City of Prague Philharmonic Orchestra and Choir.
Additional pieces have also been recorded with a string section and an orchestra of leading session musicians. The orchestral tracks are complimented by some acoustic guitar and piano pieces to create a rich and musically diverse collection.