Odyssice (a fantasy name associated with Greek mythelogy) was founded in 1986 by Bastiaan Peeters (guitar), André Hubbeling (keyboards) and Alan Natele (drums).
The first member changes has occured in 1989. Bart Kühne replaced Alan and Erik Aafjes was added on bass.
The band was musicaly succesful but musical differences caused them to disapear from spotlight for some time. Then Bastiaan and Bart decided to reïncarnate Odyssice with new members.

Impression was the succesful follower, released by Cyclops.

Album Moondrive was well regarded by fans and there were a lot of requests for a re-make.
Odyssice agreed with Cyclops records to do just that and the new re-issue will have a multimedia part with live video's and several other goodies. This album was released June 2003.
In September 2003 Odyssice finally found themselves a new bass-player in the person of Gijs Koopmans, formally bass-player of Cliffhanger. Gijs left after 6 months and was replaced by Peter Kosterman. With this new fresh member the band started working in new material.
The year 2007 and 2008 were mainly used for creating more new songs and for Bastiaan to realise his long-time dream; a private digital home-recording studio.
The recording of the new album began in Februari 2009. Seven new songs, that were selected from the demos, were recorded in the new Legend Studios. The new album Silence is released on May 23rd 2010.

A fab review from my friends of DPRP you can find here. 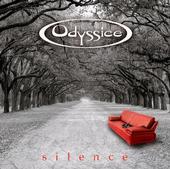 The album release will be shortly followed by the Live-DVD Secret Showcase recorded by RTV Noord-Holland, and will include bonus material.


They supported Unitopia @ the Boerderij and jeemie they were good. Photo's and more fun assap.