Friend of David Gilmour and co-writer of One Slip (AMLOR Pink Floyd '87).

David, John Wetton, Nicholls and Phil wrote the song Talk to Me, wich you can find on The Phil Manzarena Collection ('95). He played live with the Pinks in '92 (Cali-Columbia).

The Complete Explorers a two-CD set is almost a complete collection of all of the studio output of the Explorers. There are no tracks from their live CD, and Manzanera opted to include two 12" mixes instead of the standard album/single versions. The Explorers were formed by Manzanera and MacKay during a planned two-year break from Roxy Music following the huge success of Avalon (this hiatus lasted for 18 years).
Musicians: 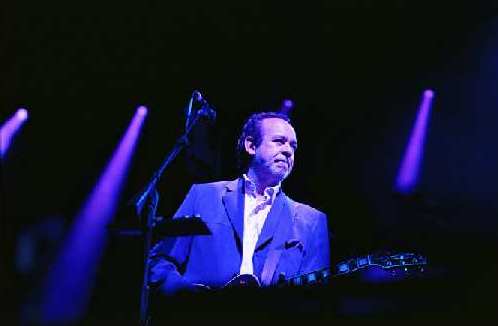 His 6th solo-album is called 6pm with the Roxy Music band and some special friends;

An album with a high Floydian and David Gilmouresque sound. And a big wink to the early days of the Pink Floyd Sound with Syd Barrett. Each song is very enjoyable to listen to, you can hear that the crafmanship of these older boys and girls is not out of age. Enotonic treatments done by the the amazing sound creator; Mr.Brian Eno.
Listen to the first track, "Broken Dreams" (about the lost of his father) and you would think that it was a forgotten Gilmour song. On "Love Devotion" he sounds even more like David Gilmour in his younger days then David himself did. And other highlight is "Wish You Well", a song for Ian MacDonald. "Green Spikey Cactus", is a superbly catchy pop song with a bluesy undertone.
The ceedee ends with two tracks that flow into eachother; "Always You" and "Sacred Days" a song that reminds of Tomorow Never Knows of the Beatles, little psychedlic 60-ies music; it sounds great. These two last songs is were David Gilmour lay down some nice guitar work.
A very splendid album with a big wink to the Syd Barrett Wish You Where Here-era. Phil and his "old" friends did a wonderful job.
The booklet is an possitive remark worthed too.

If you like this album, try the Blackfield album too. Soundsamples you'll find at this page too.

Phil's album Vozero is being re-released with new artwork and bonus track 'Tropical', sung in Spanish with Robert Wyatt on drums and keybords and Yarron Stavi from the 'Gilah Atzmon and the Orient Express' band on double bass.

Phil has released his new album called 50 Minutes Later. in October on Expression/Hannibal.
A nice rockin' album, with again some caribean songs, but the most songs are rockin' landscapes. Just like "6 p.m." a new highlight! Musicians involved:


Firebird V11 (Nov 2008).
The highly-respected, Roxy Music guitarist Phil Manzanera, whom many of you would also have enjoyed as part of David Gilmour's touring band on his 2006 tour (and subsequent CD/DVD releases), enjoys a thriving solo career. Some of you may have heard his wonderful 2004 album, 6PM, partly on the strength of David guesting on it.
Today (November 10th) Phil releases not just one, but two new albums - "Firebird V11", an absorbing collection of new songs, and "The Music 1972 - 2008", a 2CD and 1DVD set, chock full of good stuff looking back over his impressive back catalogue.
Read more here, here you can find some mp3's.


Phil Manzanera - The Music 1972-2008 takes in 25 tracks, either written or co-written by Phil, covering a career playing as a solo artist, and with the likes of Roxy Music and Brian Eno. Phil revealed the criteria for which songs were selected:
"When choosing the songs and music from a body of work that, so far, has spanned 35 years, I did wonder if some common thread would emerge, and I guess it did... namely my passion for experimentation and musical exploration through sound and collaborations. I have never wanted to play it safe, even if it means, as the great music writer Ian MacDonald said of me, 'soaring like an angel one minute and stumbling like a sleepwalker the next'."
phil manzanera the music 1972 - 2008The DVD which accompanies the set is a nice collection of items, mainly consisting of live performances from various years. There's also a fascinating 23-minute documentary, "From Revolution To Roxy", which has Phil narrating his life story - rather bizarrely, whilst driving his car! With the frequent inclusion of Super 8 film, from his childhood days in Cuba during the time of the Revolution, through the Roxy Music years, right up to the present day, it is the perfect precis of his life and career for the uninitiated. For the Gilmour completist, there is also footage of Phil and David working together on the 6PM project, which lead to the almost three-years they spent together on the On An Island project.
The set boasts a great selection of tracks, with disc 1 of the CD focusing on his first 20 years, working with Bryan Ferry and Brian Eno, amongst others, and disc 2 taking in the most recent 10 years. To hear excerpts of each track on the album, visit www.manzanera-themusic.com.

Live Feb 2009 with David Gilmour as guest;
David made a surprise, if not premature, appearance at Ronnie Scotts in Soho last night, 10th of Fer '09, joining On an Island colleagues Phil Manzanera and Leszek Mozdzer.


Read here what the Times has to say about it.

The shows proved so successful that Phil has decided to do some more, and presumably to save Leszek some travelling, has arranged them for Poland. As we know we have a fair number of Polish regulars, we're sure that this news is going to be welcome.

Phil Manzanera's Expression Records To Release The 801 Series Through MVD Audio on August 11th
On August 11 2009, Phil Manzanera's Expression Records, will release The 801 Series, comprised of 801 Live Collector's Edition, 801 Manchester, 801 Live @ Hull and 801 Latino. All four albums have been digitally remastered and repackaged with extras. The original classic album, 801 Live, is presented in a book form with an extra CD containing previously unheard rehearsal footage from Shepperton Studios as well as new photographs and text.
Please be so free and sign my guestbook.