March 2013:
The new bass player is called Peter Vink and he is know from the legendary band Q65.
Gijs Kooijmans left due personal circumstances.

Saturday, September 28 2013 - 19.30 MAY 2012;
We are very pleased and excited to announce the new guitarist of Knight Area. After going through an intense process of auditions and meetings we are proud to announce that MARK BOGERT will reinforce our band. Mark is a talented and experienced guitar-player and we are convinced that he will give Knight Area new creative impulses.

FEB 2012
Mark Vermeule leaves Knight Area!
It is with sadness that Knight Area announces the decision of Mark Vermeule to leave the band. Mark wants to focus more on family and career and so he feels he can't give himself for the full 100% to the band. Although we feel very sad about this, we respect his decision.
Mark will continue to perform live with us until we have found the right successor. We want to thank Mark for all the friendship, music and dedication he gave to our band and we wish him all the best. Below you can read Mark's comment to his decision.
"After a little more than 8 years, I have decided to leave Knight Area. This was not an easy decision, and it took me quite a long time to figure out that I wanted to stop and why. Like most of my band mates, I have obligations to my family and my work. This last year, the time I needed for my family and for my career has grown considerably. To me, Knight Area is not just any band that you can do on the side. I have been very dedicated and have worked hard together with the rest of the team to achieve our successes, and we´re in a phase where I think the band needs a lot of time and effort. However, at the moment, I don't have the time that I feel is necessary for a band like Knight Area. It´s all or nothing, and I won´t do this with 10% of the normal effort.
I am thankful to the Knight Area team and all the people that have helped us get this far. I have had a lot of fun, have learned a lot, have been frustrated or angry at times ... just like being in a relationship. I also want to thank all the fans for making this possible. It was a pleasure making and performing our music for you.
I wish the guys all the best for the future and am happy to call them my friends.
Until the band has found a new guitarist, I will do the gigs that we have planned for this year. 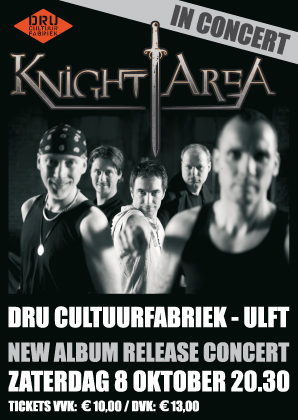 Album launch at the Dru Fabriek in Ulft 8 October.
Please be there, tickets and special offers with hotel at www.drucultuurfabriek.nl.

June 2010:
Interview with Gerben you can find here.

News: KA at number 2 at www.usaprogmusic.com!!!

A Dutch band that worked for more as two years on their astonishing debut album. But the whole concept was originally concieved more than 20 years ago by Gerben Klazinga...
A concept album about a boy who is in search for his identity.
The Sun Also Rises ('04): 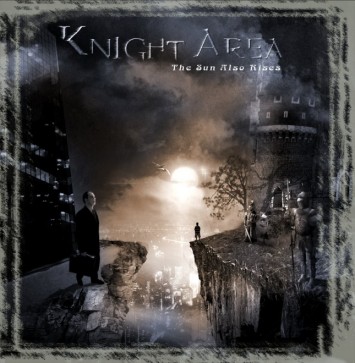 Classic Epic Symphonic Rock; who likes Genesis, Camel, Focus and the new proggy bands like Jadis and IQ will love this album.
An excellent Dutch product in the tradition of other great Dutch bands like Kayak, ALquin, Phytagoras, Finche, van Ottendyke. See the Dutch-pages. 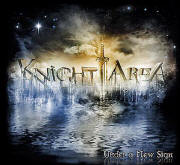 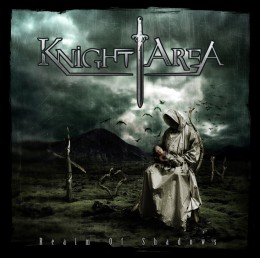 Rising Signs from the Shadows ('10).
On November 26th, 2010, Knight Area will release its first live album. This 2CD pack contains the recordings of the release show of their latest album ‘Realm of Shadows’. The first part of the show the band performs the entire Realm of Shadows album. In the second part of the show, the band performs a mixed set of songs from both ‘The Sun Also Rises’ and ‘Under a New Sign’. Enjoy a very energetic performance for a great audience and a high quality sound! The live album will be available at Knight Area gigs and via the website of the band ( www.knightarea.com).

Nine Paths.
Album launch at the Dru Fabriek in Ulft 8 October.
Please be there, tickets and special offers with hotel at www.drucultuurfabriek.nl.

Between two Steps (2013) is the new album of those proggers of the West of the Netherlands.

Singer Mark Smit: "Between two steps marks for us the beginning of a new period. With Mark Bogert we found ourselves a new guitarist, and Peter Vink has been added as bass player. This has given the band a thorough creative impulse. The sound of the band has changed and we are moving into a new direction. With this EP we want to show where we are standing now, and what our fans may expect of the new album."

to top
Please visit my guestbook.
or click on reply for feedback-form please

Just a few simple questions and space for comments.