Jazzy Prog from the States, the band was highly succesfull in the 70-ies and made a few good albums like Happy the Man (1977) and Crafty Hands (1978).

Beginnings ('90). This recording is a collection of music from Happy The Man's first two years - 1974 and 1975. Featuring material never before released, the album offers an hour of meticulously-crafted compositions from one of America's best progressive bands.

Live ('97). A great album that reflects their carreer and music. Bits of the symfonic Yes, combined with the smoothnes of Camel and with some jazz-influences like bands as Henry Cow and Soft Machine.
The live CD was recorded July 1, 1978 at The Cellar Door and October 8, 1978 at Louie's Rock City (*) by Skip Pizzi.


Stanley was in the band Ten Jinn untill the end of the 90s.They played a prog rock festival in Mexico when he was askes if there was change that Happy The Man would a rise. The promise was made that thy could haedline the NearFest Fetsival;
The Muse Awakens ('04). 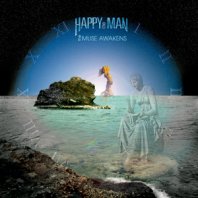