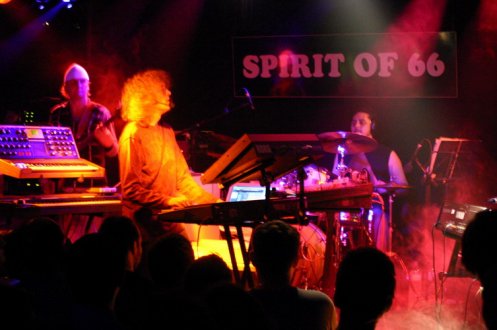 The gig in Verviers was splendid, Roine had some troubles with his guitar, but it wasn't a big deal. The overall sound was very good, a nice warm sound with a nice volume.
Andy is a real keyboard wizzard! And of course the 3 Flower Kings together are one big Team, they can play everything and did a lot of improvising. And of course there was Sam, with her lovely and fascinating jazzy keyboard solo's! On the studio-albums there was some sax and flute (done by David Jackson and Theo Travis) on stage Andy and Sam took over their parts by playing marvelous on their keyboards. And the big friend of Andy, Guy Manning, guitar and vocals wasn't there and that was a shame too.
The gig was really awesome, and that for a band who came together for practizing a week before... unbelieveable!
They started with The Winning Game song by Roine, later on Andy took over all the vocals parts, Roine only song a few few versus and backing vocals.
The new song were recieved very well. There was much room for improvisations and that worked well. Even the instrumental bonus track was played and that's not my favourite track of the album. But live it hit me, it started with Andy and Sam doing the keyboards and I thought "that's a shame they're playing "Exponenzgesetz", mmm strange there are so many songs that sound better".

But when the band started to get loose it went uphill, it went straight to the moon. From ambient till pure prog till real jazzy improvisized song.
It was pure fun to hear Zoltan playing the drums, wonderfull. Jonas did give away a few nice bass-solo's and of course there was Roine playing some excellent solo's and improvisaties.
The last encore was America, think Keith Emmerson would like this version of the song, Andy was playing wonderfull on his keyboards using his hands and feets.
The crowed yelled for another encore, but Andy did made clear that all the songs the band had practize were played so this was it...
The band had a great evening just like the crowed at famous Spirit of 66.

I missed my friend Guy Manning on the stage, he played on the Tangent albums too. I would love to spoke with him about his new album and drink some beers...
It was nice talking to Andy, Sam and the others ;-)

More live pics (better ones), from a German friend: 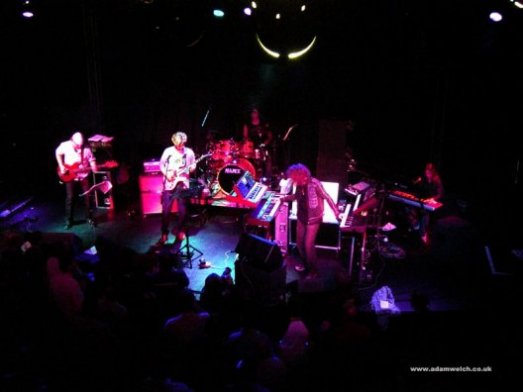 Picture of Zoetermeer.
Back to The Tangent.