The Reasoning was born out of necessity. Necessity to play and necessity to bring music to people who desired more than just rock and more than just prog. The band formed in October 2005 after Matthew Cohen left prog band Magenta earlier that year. He quickly established an experienced line up of musicians and set about writing songs. Within a short period of time things fell into place, the material started to flow and The Reasoning welcomed on board a truly exceptional talent in the form of multi award winning singer Rachel Jones, who had previously fronted Karnataka, and has won Best Female singer for the Classic Rock Society for an unprecedented 4 consecutive years.

The Reasoning also boasts the vocal talents of Dylan Thompson and Gareth Jones. Their incredible understanding of harmonies and dynamics makes the bands sound one to behold. Along with Lee Wright and Vinden Wylde, this band knows how to play and entertain. ...

An impressive press release but do they fulfill the dream?
Yes they do and read here why:

A band with two excellent guitarist and three outstanding vocalists, who all take lead vocals and heavenly & adventurous harmonies. This is what the makes the sound so unique.

A gentle keyboard starts the song, the band kicks in and the song gets on steam. Just when all the members are joiningh in at full power and the music stops a fraction of a second  silence, the band kicks in again, the music stops for a second time... silence and ROCK! An up beat song with lead vocals of Dylan, with his amazing dirty rock voice. Then a few lines of backing vocals with the gifted Rachel and Gareth. Gareth take over a verse followed by Rachel on her own and then all the three singers jump to the stars. This is one of the trademarks of The Reasoning; three excellent talented vocalists, which have totally different voices. Three people who have the ability to sing together on a very inspiring and beautiful way.
An other trademark of the Reasoning is the powerful catchy riffs that sticks in your head and have enough layers and tempo changes to explore over and over again.
If you had the idea to set up this new cd and read the paper, youre awakened now and you are all ears and eager on what is next.

Dylan: Lyrically, Awakening was written quite loosely and for broad interpretation...It was the first song myself and Matt composed and I think at that time we were concentrating on the music as a whole, and I remember us just playing around with different words and trying to put together some lines which created imagery...
I suppose the title encompasses what the song was really intended to be about, an awakening... an emergence, ie. the awakening of the song, of the music and of the band...I suppose you could say its a praise to the realization of the band and its potential...

A haunting magic spoken intro by Rachel accompanied by a nice guitar and a scary keyboard loop. An excellent intro for a song, that could become a classical. When the drums kicks in, you have to get up and dance.
Good guitar riff and the catchy keyboards and drums stick in your brains for weeks.

Rachel; "Chasing Rainbows" is about the place between life and death - a place in-between where anything is possible. The quote "nothing is true, everything is permitted" (a favourite quote of the author William.S.Burroughs) sums it up perfectly.

A song about a guy in the wrong band, but they have fun and a little success, but the music is not what he wants to play. So he steps out the band and starts an own band and now I hope its time for me to shine and yes he does!
A delighted swirling pop song, which easily can compete with the great songs like the super band Kino has made. Gareth does some really nice keyboard/ piano playing, a nice guitar solo follows and Vinden kicks some butts.

A subtile piano play, done by Gareth, and a soaring slide guitar, by Dylan, gives this song a great intro. And it takes you by the hand and leads you to the heavenly vocals of Rachel. And again a catchy riff and interesting loops of all the instruments. The heavy solid bass line and the poundering drums in a nice instrumental loop are near to a metal interlude and it really Rocks. The two boys take over the vocals. The song rocks further and swings and maybe the tune is simple but the tempo changes, the guitar riffs and strong drumming makes it a really powerful song.
Live this song was a highlight of the evening.

This song was as demo on the MySpacePage for ages and was really a hit already. But the final mix (done by Dave Megan known from Marillion, U2 and others) is sublime.
Nice intro done by Rachel and a wonderful Peter Gabrielesque vocal by the versatile Dylan. Think that Peter Gabriel could have written this song on one of his best days. It starts as a slow adventurous ballad, but after a tempo change it becomes more rockier.

Dylan; The song closest to my heart is Sacred Shape, a song I demod and took to Matt with the lyrics already written...It's about the idea that we are ignorant to a more profound existence...that most people don't consider on a daily basis what we actually are...that we all have a common bond as spirits or entities, that we are constantly distracted by what we consider as everyday life...It's a common theme that tends to come up in a lot of things I write...

Another up tempo song, vocals by the lovely trio and some excellent drumming by Vinden. A nice acoustic guitar bridge leads us to solo performances of Matthew on bass and a creepy guitar solo by Dylan.

Dylan; The take I get from that song is that everybody is fallible and can be wrong at some point in their lives and it is accepting this and forgiving that makes us good people...Matt was on scene but me and Rach wrote most of the lyrics to that one and a lot of them were from Rachels lyrics so it might be an idea to ask her for her own take on that song...

Rachel; The song is a very philosophical one! Essentially, it is based on Nietzsche's theory of eternal recurrence. He claims that none of us can claim to have lived a full life unless we can honestly say that, given a chance to do it all again, we wouldn't change a thing. A bit like the film "Groundhog Day", really! Everything is connected, and all that we do in the present will have important consequences in the future. 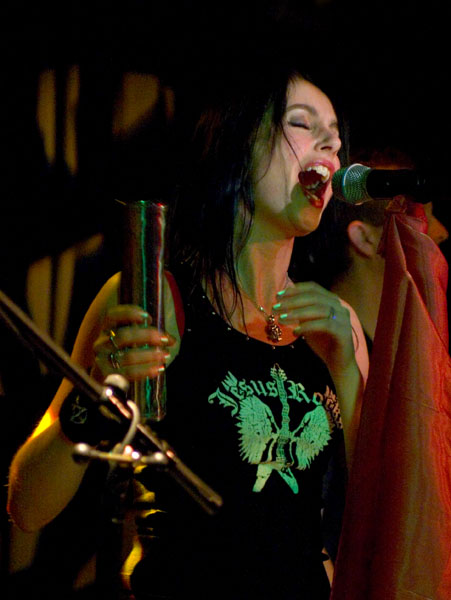 A dirty fat rock song, lead vocals by Dylan. A bridge to a softer passage and lovely vocals by Rachel, followed by a great guitar solo and a keyboard break.
Lots of tempo changes, but the devilish body of the songs is always there.

Liz Pendergrass on an amazing violin and Matthew the helmsman on acoustic guitars and some distant 'backwards' guitar which Matthew recorded, leads us to the exceeding vocals of Rachel. Steve Rotterhy of Marillion joins in with an awesome guitar solo and the songs ends to early. A splendid climax to end this album.

The Reasoning is an absolute new star on the firmament of Rock Bands, with a lot of potential in the band. The rich instrumentation and the tempo changes, without becoming freaky or too complex, brings in some progressive tunes as well.

The most amazing thing is the perfect mix of the three really different solo singers. A dirty rock voice by Dylan, heavenly vocals from the beautiful Rachel and the smooth pop-rock voice of Gareth.

The spine of this band is the big, melodic sound with catchy irresistible riffs, with lots of layered harmonies.
They are all great driven craftsmen, who all have the ability to work together on that one goal, make a great energetic Rock album. An album with a positive attitude that is worth to listen over and over again and where you can explore many beautiful passages. And an album that combines new Rock Stars like Gareth and Dylan with the more established star like Rachel, who had some world success in her previous band Karnataka, and who was responsible for a big part of their success.

An album that is not recorded in a wimp of an eye. The band is together for more as a year and had some amazing amount of studio time on their side, because Matthew owns a studio. They have thought about every note, every word and every hit of the drums. I think that the final mixing done by the Dave Megan had a great positive input as well.

So if you want to Rock, want to hear something fresh, something new with a glimpse of bands like Led Zepplin with energy like the Who and the flow and the depth of a Peter Gabriel composition, try this and I think youll be more as delighted about the positive power and the sublime Music this 6 piece band has produced.

Its no doubt about the quality of this astonishing debut album of the Reasoning. This must lead to success and to a new classical Rock Album that will make history.