October 2008.
Heather got a baby called Harlan ;-) They and their father are doing it well ;-) 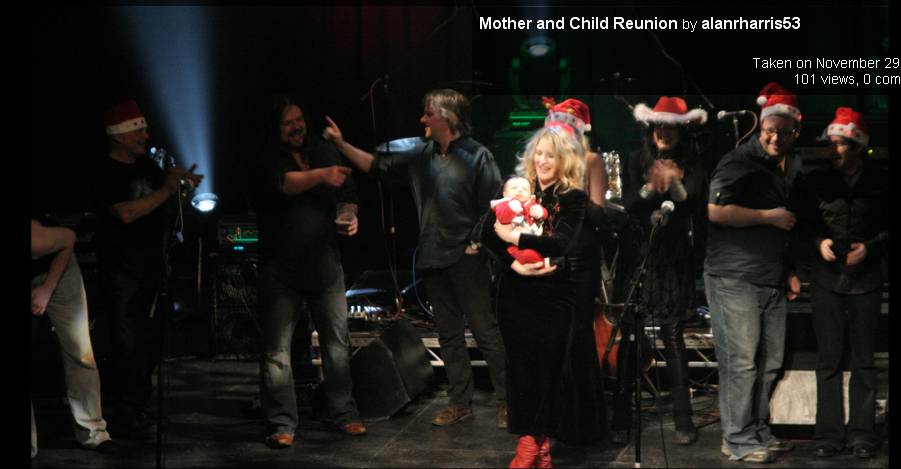 October 2008.
Mostly Autumn supports the Bad Shepperds:
Following on from Uriah Heep, Jethro Tull and Bryan Adams , the latest in the long list of established celebrities who have discovered Mostly Autumn and invited the band to join them on tour is none other than Adrian Edmondson .
The Bad Shepherds is the exciting new collaboration conceived by Adrian featuring Maartin Allcock from Fairport Convention and Jethro Tull , Troy Donockley renowned for his work with Mostly Autumn ,Maddy Prior, Midge Ure , Nightwish and others plus rising Irish music star violinist Eimear Bradley .
The Bad Shepherds revisit punk era classics and add arrangements inspired by traditional folk music . The effect is stunning as new wave anthems from The Jam , The Clash , Kraftwerk , The Stranglers , Squeeze ,The Sex Pistols and others are approached from an acoustic/ Celtic standpoint .

Bryan writes;
"Following the kind invitation from Adrian Edmondson, we are extremely pleased to announce that we will be joining the Bad Shepherds for a number of dates from this autumn.
This will be a chance for you to see a different slant on Mostly Autumn.
On this tour we will be performing a number of songs with Olivia Sparnenn standing in for Heather, (who will obviously be indisposed at this time, but getting ready to join us for the full line up concerts) and various other members of the band in a more semi acoustic setting.
We are very much looking forward to this tour, and the chance to perform songs in a different light to many new faces and hopefully some of you as well.
Hope to see you out there, let's have some fun!
Bryan Josh"

April 2008.
Glass Shadows is out now, see the previous page.

Hi folks, it is again my duty to inform you of some happy and sad changes in the Mostly Autumn line up.
The sad bit....
Angela Gordon has left us to concentrate her time on being a dedicated mother and we wish her all the best and thank her for her tremendous dedication to the band over the last ten years. See her statement Below.
Chris Johnson has also decided to leave for various reasons (see statement below) although you may see him occasionally filling in on the live front. We thank him for his beautiful contributions to the Mostly autumn family. See his statement below.
We would also like to thank Andy Jennings for stepping in for the last tour, unfortunately due to commitments he is unable to commit to the next tour.

The happy bit.....
We are extremely pleased to announce the welcome return of...
Liam Davison on guitars.
Iain Jennings on keyboards (Barring the occasional gig due to former commitments).
Anne Marie Helder on keyboards, guitars, vocals and flute.

We would also like to welcome on board a fantastic new drummer by the name of Henry Bourn who is playing on the album as we speak.

Nothing stays the same but ROLL ON THE BIG SOUND.
Cheers,

After much soul-searching I have decided that the time has come to bow-out of Mostly Autumn.
I offer my heartfelt thanks to the Mostly Autumn family, especially Bryan, Heather, Jean and Suzi, and to the fans whose support has been overwhelming, who have all made the last 10 years a fantastic adventure.
It was my intention to return to touring after the birth of my daughter, Scarlett but I could never have anticipated how my feelings would change. Although there are several reasons, ultimately, performing locally over the last few weeks has made me realise that being away from Scarlett to tour further afield is out of the question at this time.
I will however continue to perform locally, both solo and with the York ensemble, Garland Of Flutes, and have firm plans to record my debut album in September of this year. Mostly Autumn will always be very close to my heart and I have wonderful memories to take with me into the next chapter of my life.

This was a very hard decision to make; I was really excited about recording the new Mostly Autumn album but the desire to do my own record has always been there and it just wasnt going away. The encouragement and support of Bryan and Heather has opened up new avenues in my song writing and finally given me the confidence go forward on my own. It feels like the right time; my personal circumstances enable me to commit a lot of time this year to a solo album. To remain so creatively focused on Mostly Autumn would have been spreading myself too thinly, and MA isnt the kind of band where you can give less than 100%. This is going to be a key album for MA and theyre playing some of the biggest shows of their career in the next 12 months, Id feel like Id be letting down myself, the band and, most of all, the fans if I was going into this with my attention elsewhere.
Im hoping to record my new record in breaks from touring with Fish. Most of the songs are written already, Im grabbing studio time wherever I can to get the demos recorded, and the emerging album already has me very excited!
Im documenting the whole process on my website www.chris-johnson.info. Theres already a couple of rough mixes up there and Ill be posting new songs as theyre recorded. Im actually hoping that all sorts of stuff will find its way onto the site  new demos, live recordings, concert footage, remixes and one-mic-in-the-middle-of-the-room jams. Also, by committing to showing the entire process online everyone will know if I slack off!
I feel privileged to have been part of the Mostly Autumn world and shared so many emotions and positive experiences with the band, everyone behind the scenes, and of course the fans. It really does break my heart not to be involved in Glass Shadows but if I dont do my own thing now Im not sure I ever will.
I honestly hope to remain part of the Mostly Autumn family and that we may work together again in some form or other somewhere down the line.

With love, with thanks,


Hi everybody,
Well, after a few months with our heads elsewhere I can say that it is very refreshing to get back into the world of Mostly Autumn and we are all very much looking forward to playing live for you again.

The line up for the forthcoming shows will include Anne Marie Helder who will have the baton passed to her from Angela who as you know is going to be a mother very soon.

Angela will be present for the next two shows and we all wish her the very, very best. We will officially start working on writing a new album later this month which is to be released in spring and are looking at the possibility of doing an in depth video diary of the whole process, from the very start to the very end of delivering a record, there will be an official statement in the next ten days on this.

To promote the album we will tour from late April into May, all dates will be listed very soon.

Roger Newport, a dear friend of the Mostlies, joined them on several gigs in the last week before Christmas.
Roger is a gifted guitarist and a Mostly Autumn fan since he was born. 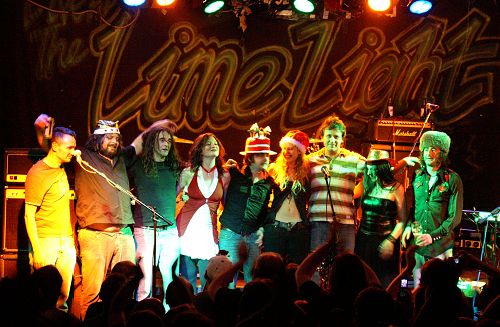 The regular eidtion will be in the stores in February!!!

News 26th of May:
Bryan & Liam are involved with a review of On an Island, see this page.
With members from Pendragon, The Reasoning, Magenta and others....

Mostly Autumn did an excellent gig at the Open Air Festival in St.Goarshausen 28 July 2006! That's the famous Loreley gig.

Breathing Space is his breathtaking album!!!


Liam Davison, the guitarist of Mostly Autumn, is working on a solo album too!

The Storms Over London Town cd will was released in March !
You can buy at their gigs or at www.mostlyautumnrecords.com.

A new album from Mostly Autumn is due to be recorded next year (July / August).

There'll be a lot of chances to see them live as an impressive list of venues.

The X-mas gig at the Boerderij in December is recorded for DVD, but sadly the recordings were to bad... so I belive they ended in basket.

Interview with Heather Findlay about "Storms..." the new album.

Ben Thunder Matthews played keyboards on the gig in Mexico, March the 9th. The gig was very successful and the band has made some new fans.

Chris Johnson takes over the keyboard duties at the current tour. Chris worked with the Mostly Autumn last year. He is a sound engineer.
He also did the support act with Olivia Sparman (who sings now with Mostly Autumn and was also the lead singer in Iain Jennings band).

BRYAN JOSH;
Have a look at his own page, the same for Heather Findlay, but have a fast look below first.

Worked on a double DVD of the Story of Pink Floyd (June 2004). Movies, live shots, promo films, reviews of each album, with an beautiful booklet, so as we are used too (Mostly Autumn at the Grand Opera and Astoria). Produced by Bob Carruthers. See for more details the Pink Floyd page.

The same happend with Genesis -Inside the Music DVD.
These DVD's can be ordered at Mostly Autumn.com.

Did some session for the band Gabriel.

Gina Dootson and Marc Atkinson who are members of this group appears on the DVD/Cd The Story so Far, backing vocals.
Marc & Gina appeared on their new remastered Anthology album.
Gina Dootson is currently doing some solo-stuf.

Gina Dootson.
IAIN played with her before he joined Mostly Autumn. Gina plays sings also at Marc Atkinsons band Gabriel (See above).
This is what she wrote early November 2005:


I'm booked in the studio with the band in early December to start recording lots of new songs... can't wait.

She got an album out called "3am Generation" and a hit single with the Thrillseekers "By tyour Site" ('05).

Julia is a strong storyteller gifted with a beautiful voice.

She has a beautiful voice, the gorgeous "Only You" meant they well deserved their third place.

May 2002 - Heather Findlay, Mostly Autumn
No storyteller with enough empathy to understand the world twice over could match the gritty realism of a girl who's been to the bottom and, like cream, risen to the top with a pocket full of treasure that is 'Shine'.

See: www.juliajenkins.com/
If only stones could speak by The Bollenberg Experience, see John BoBo Bollenberg ('02).
Excpected to be released, summer 2002.
Gueststars; Rick Wakeman, Jordan Rudess (Dream Theater), Roine Stolt (Flower Kings, Transatlantic, Kaipa), William Kopecky, Par Lindh, Bjorn Johansson and a 16-piece choir. Heather can be heard on three tracks whilst she also plays whistle and bodhran on one track. Bryan has recorded guitar also on three tracks and has also sung on one of the songs which Heather does.