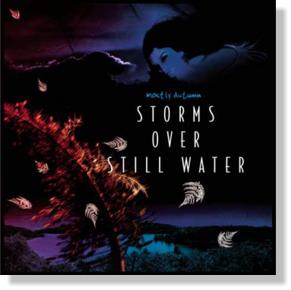 Again a splendid rockin', dark, powerful and symphonic album, with a nice mix between the harder rockin' songs and the more symphonic epics.


Disc one features the new album.
Disc two is a full DVD on the Making of Storms Over Still Water.

For more info look at: this page

See what Bob Carruthers an Bryan have to say about it & soundsamples.

A single cd with 5 tracks and one hilarious bonus track. Recorded and engineerd at the Chapel Studios by Will Bartie & Ewan Davies.
With:

The STORMS OVER LONDON TOWN was released end of February 2006!
You can buy at their gigs or at www.mostlyautumnrecords.com.

Review:
June the 4th 2005, launch of the "Storms over stil Water" album in the Astoria. It was a great gig, not the best I've seen but nevertheless a great gig and an unforgetable night. Finally the live cd is out and sadly some things changed in the Mostly Autumn line up, Mr Iain Jennings has left the band. A good time to look back and have a new listening experience:
The first two songs are mixed with a lot of reverb, Bryans and Heathers vocals are sounding a bit weird.
The up-beat tempo of those two songs continu with "Answer the Question" and the another two songs.
Ben "Thunder" Matthews brings "Black Rain" to a higher level with his tasty guitar playing. And with the excellent vocals of Olivia Sparman and a nice guitar solo at the end "Never the Rainbow" becomes really worthed to listen again, and again.
With the great instrumental track "Distant Train" the cd turns into the more symphonic side, the side I like more. Great keyboard riff and the unmistakeable guitar solo's of Bryan.
The songs are played suberp and for me the Spirit of Mostly Autumn is back in town.
"Carpe Diem" and "Storms" (with the lovely Rachel Jones) are another two classical highlights.
The cd ends with "The Spirit of Autumn Past (part I)", another Iain Jennings song. A bit odd, Part I is a great intro for Part II...
Bryan wrote the liner notes and about that last songs he added: ".. this song for me represents a lot of magic that went on working with Iain, and in a way, also the sadness of how things inevitably move on and change...". And if you take a good look at the tracklist you'll nortice that Iain has (co-)written 5 tracks, so is this a big thank you for Iain?
If I skip the first two songs, (5 up beat tempo songs in a row is too much for me) I'm very pleased with this live recording. As big fan I know that Mostly Autumn catch you with their live performances and it is hard to get that Spirit on cd. Chris Johnson was responsible for the sound effects and he did a splendid job. And with all the guest musicians it becomes one of the best live recordings of this powerful band.
Because I like theire symphonic side more as theire more rockier songs, I miss a few epics like "Mother Nature" but what the heck, they'll perform soon in my hometown nabourhood. So make sure that they catch you with that Spirit too and go and see them on the road!

The Albums, click on the titles for more info.